Iseq follows trend and falls back 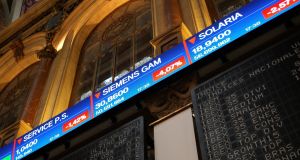 The benchmark euro zone stock index was down 0.4 per cent, with tech stocks leading declines for a second straight session as they retreated further from 20-year highs.

European shares ended lower on Tuesday as high sovereign bond yields pressured heavyweight sectors such as technology, while a batch of mixed corporate earnings cast doubt over the pace of a post-Covid recovery.

The benchmark euro zone stock index was down 0.4 per cent, with tech stocks leading declines for a second straight session as they retreated further from 20-year highs.

Technology stocks in particular have also been viewed as expensive by investors after their outperformance through the Covid-19 pandemic.

“Investors are cautiously optimistic about the rise in US bond yields and what that tells us about inflation trajectories, while German shares seem to be weighing on the wider European market as tech stocks weaken further with the Dax being a tech-focused index,” said Michael Hewson, an analyst at CMC Markets.

The Iseq fell 0.5 per cent to 7,412, tracking trends elsewhere. Homebuilders Cairn and Glenveagh fell or traded flat after the Government agreed to a further extension of the current lockdown, which includes construction.

The construction industry, which is 40 per cent operational, had been pushing for the restrictions to be eased.

The extended lockdown, however, did not stop the State’s largest hotel owner Dalata rising 0.6 per cent to €4.13.

Permanent TSB, which is in discussions to buy assets from the exiting Ulster Bank, rose 2.75 per cent to €1.12. Rivals Bank of Ireland and AIB rose by 1.9 per cent and 0.8 per cent. Glanbia fell 0.8 per cent to €10.03 ahead of publishing its full-year results for 2020. The food group has been struggling to stem a falloff in protein sales and cope with the fallout from Covid. Packaging group Smurfit Kappa was down 2.4 per cent at €39.70.

European stocks have rallied sharply off pandemic-driven lows hit last year, but have been unable to reach pre-Covid highs on doubts over a euro zone economic recovery due to fresh lockdowns in major countries.

Among individual movers, HSBC Holdings dropped 0.8 per cent after its annual profits fell sharply due to the pandemic, while it unveiled a revised strategy focused mainly on wealth management in Asia. Swiss packaging firm SIG Combibloc bottomed out the Stoxx 600 after its annual core earnings missed estimates.

German healthcare group Fresenius slipped after it narrowed its 2021 sales growth forecast and said it would launch a cost-cutting programme, while cement-maker Heidelberg Cement dropped 2.3 per cent even after preliminary results showed core profit was up 6 per cent last year.

French energy group Total gained more than 2 per cent after it agreed to sell stakes in some wind and solar farms to Credit Agricole Assurances and Banque des Territoires.

UK stocks closed higher on Tuesday, bucking the trend in Europe as optimism around an economic recovery led by plans to ease restrictions in Britain offset a spike in the domestic unemployment rate.

After falling as much 1.7 per cent, the commodity-heavy FTSE 100 ended 0.2 per cent higher after British prime minister Boris Johnson said he was very optimistic that all Covid-19 restrictions in England would end on June 21st. The mid-cap FTSE 250 gained 0.4 per cent.

“The announcement has given market an extra confidence that the economy will be starting to move back into normalcy progressively over the next few months and shares of travel companies and banks are benefiting from that,” said Chris Bailey, strategist at Raymond James.

British Airways owner IAG gained 2 per cent, while easyJet, Wizz Air and Cineworld gained between 1.8 per cent and 9.5 per cent.

Summer holiday bookings surged by as much as 600 per cent after Britain laid out plans to gradually relax coronavirus restrictions. HSBC Holdings edged up 0.8 per cent, alongside other banking stocks, despite lowering its long-term profitability target.

Barclays and Lloyds Banking Group rose 3.1 per cent and 2 per cent respectively.

The Nasdaq index fell more than 2 per cent on Tuesday as investors sold off mega-cap growth stocks on valuation concerns, while keeping a close eye on Federal Reserve chairman Jerome Powell’s testimony in Congress.

Shares of Netflix, Alphabet, Microsoft, Amazon and Apple slipped between 1.5 per cent and 3.5 per cent in early trading.

“There’s definitely an assumption that inflation has crept and bled through and we are starting to see some impact of that assumption in the growth style of investing,” said Keith Buchanan, portfolio manager at GlobAlt in Atlanta.

“It’s hard to imagine a scenario in which there’s upside to the larger broader market if those large cap growth stocks don’t lead the way.”

A slump in bitcoin hurt shares of Tesla, which had invested $1.5 billion (€1.2 billion) in the cryptocurrency recently.

The electric-vehicle maker tumbled 6.6 per cent and was set to plunge into the red for the year. – Additional reporting by Reuters