Inditex rally pushes European shares up ahead of UK election 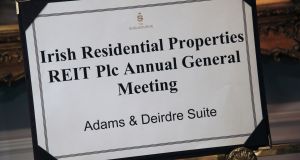 European shares made small moves on Wednesday in anticipation of pivotal global events such as a US-China tariff deadline, the UK general election and some central bank meetings, but a 5.2 per cent rally in Zara owner Inditex ensured a higher close.

It was a relatively quiet day in Dublin on Wednesday with investors getting nervy about the outcome of the election in Britain. Companies with a heavy exposure to the UK were generally weaker and volumes overall were low.

A Sinn Féin Bill providing for a three-year rent freeze across the private rental market hit shares in the State’s largest landlord, Ires Reit. It closed down 7.3 per cent lower, with as much as €70 million wiped off its value.

This had a knock-on effect on other property-related stock with Hibernia Reit down 3.5 per cent. Builder Glenveagh was down 1.2 per cent while Cairn Homes was 0.8 per cent lower.

Elsewhere, Ryanair proved resilient, closing flat after Tui Group updated the market about winter bookings. It said the grounding of its Boeing 737 MAX aircraft would continue to drag on profits.

Other movers in Dublin included Smurfit Kappa, up 1 per cent, and Kerry Group, which lost 2 per cent.

Stocks most exposed to the British economy slipped on Wednesday on growing expectations of a close election outcome, while JD Sports dropped 10 per cent after its top investor cut its stake. The mid-cap bourse, whose constituents make half of their earnings from business in Britain, closed 0.6 per cent lower after dropping nearly 2 per cent during the day.

The exporter-heavy FTSE 100 ended flat as gains due to a weakening of the pound were offset by steep losses in oil firms after a surprise build-up of US crude inventories.

Stocks considered most vulnerable to any shocks that may arise from Britain leaving the European Union weakened. Lloyds, Britain’s biggest mortgage lender, fell nearly 2 per cent, while retailers Morrisons and Sainsbury’s were down 2 per cent and 1.4 per cent respectively.

Fashion retailer JD Sports, the FTSE’s best performer this year, had its worst day in more than three years after Pentland sold 24 million shares at a discount. Stagecoach jumped 9 per cent to be among FTSE 250’s top gainers after the transport company said half-year earnings in its London bus division were ahead of expectations.

The pan-European Stoxx 600 index ticked up 0.2 per cent, reversing early gains. Spanish shares on the Ibex rose 0.8 per cent to lead gains among regional peers as Inditex shares scaled a two-year high after posting a strong profit growth.

Among other shares, German engineering company Siemens was among the biggest boosts to the Stoxx 600 after it named its strategy chief and former Kuka chief executive Horst J Kayser as boss of its loss-making portfolio companies.

The Dow Jones index was pressured by losses in Boeing and Home Depot in early trading on Wednesday, while the S&P 500 and the Nasdaq held on to gains as traders awaited the Federal Reserve’s December policy statement for clues on the strength of the domestic economy.

Boeing was down 1.5 per cent after the Federal Aviation Administration confirmed it would not allow the grounded 737 MAX to resume flying before the end of this year.