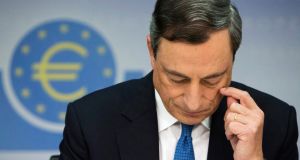 The European Central Bank slashed its forecasts for growth and inflation over the next two years, saying the outlook had deteriorated since its last staff forecasts were published in September.

The bank also kept the cost of borrowing at record lows after it met today and said it would make a decision on further stimulus early next year.

That disappointed some traders who had bet that Thursday’s meeting would bring details of additional measures, possibly a US-style government bond-buying scheme, seen as strongly supportive for the equity market.

ECB president Mario Draghi said the bank would reassess the impact of its recent policy measures early in 2015, though not necessarily in January, and take further action - including such quantitative easing - if needed. “Investors were hoping for more substance on sovereign bond purchases, but Draghi hasn’t given investors anything that is really new,” said John Smith, senior fund manager at Brown Shipley.

By lowering its forecasts, which show how the ECB expects the economy to develop, the euro zone central bank will heighten expectations that it will take further steps to bolster the bloc’s flagging economy.

While a perceived lack of detail caused investors to cash in recent stock market gains, many still believed the ECB would announce sovereign bond purchases next year.

Mr Draghi said technical preparations for further stimulus measures were being stepped up.

At Thursday’s meeting, the ECB left its main refinancing rate, which determines the cost of credit in the economy, at 0.05 per cent. It also kept the rate on bank overnight deposits at -0.20 per cent, which means banks pay to park funds at the central bank.

Mounting concerns about the euro zone economy were underlined by the US Federal Reserve’s influential vice chair, Stanley Fischer, who said that money-printing would help Europe as it had the United States.

“If the ECB moves in that direction, it will have positive effects,” Mr Fischer, who was Mr Draghi’s academic mentor at university, told a newspaper in Italy.

Last week, Sabine Lautenschlaeger, Germany’s appointee to the ECB’s executive board, said now was not the time for state bond buying. So while the ECB could extend a scheme to buy secured debt to include corporate bonds, it is unlikely it will announce any money printing to buy government bonds.

Economists, roughly half of whom expect the bank to start buying government bonds - a step that should buoy the economy when banks exchange bonds for ECB cash - have pencilled this in for the first three months of next year. ECB vice-president Vitor Constancio has said the bank will be better able to gauge then whether it needs to take the ulitimate policy step.

Other major central banks including the Fed, Bank of Japan and Bank of England, have already used quantitative easing to stimulate their economies. But divisions between debt-shy euro zone countries such as Germany and southern states including Greece make such a step more difficult for the ECB. Germany, the bloc’s biggest economy by far and its most influential, fears it would encourage reckless borrowing.

1 How can I view my dead brother’s will if I’m not the executor?
2 What’s in a name change?
3 Provisional liquidator appointed to Dublin engineering firm
4 Bursting of Tesla bubble a case of ‘not if, but when’
5 Bank of Ireland staff in line for 2.95% pay increase
6 Apple warns it will not meet revenue guidance for March quarter
7 Japan on course for technical recession, economists warn
8 How to . . . move (almost) everything to your new phone
9 Big tech gains aren’t ‘extraordinary’ after all
10 Ben Dunne objects to revised plan for new Premier Inn hotel in Dublin
Real news has value SUBSCRIBE