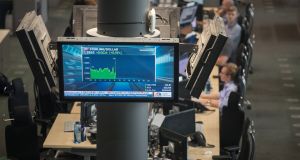 Sterling nursed losses on Wednesday after falling to an 11-month low against the euro in the previous session as investors remained sidelined with little interest in trading the currency amid ongoing Brexit negotiations.

Against the euro, the British pound recovered some ground to trade at 92.47 pence after falling on Tuesday to its weakest level since early October at 93.07 pence per euro.

The British pound has fallen more than 3 per cent so far this month against the euro and is set for its fourth consecutive month of losses.

Sterling was broadly flat against the dollar at $1.2906. “We are staying away from the sterling for now as it remains a headline driven currency even though on a valuation basis it looks attractive,” said Thomas Flury, global head of currency strategy at UBS Group.

Investors focused on the third round of Brexit negotiations which started on Monday, with the European Union’s chief negotiator saying he was concerned at the slow progress of the talks.

The British government has laid out a series of position papers that have outlined compromises over some of the issues likely to block progress in talks this year, but EU officials say Britain needs to settle its divorce bill with the bloc before a trade agreement can be discussed.

Morgan Stanley strategists said the sterling will likely weaken further against the euro until October’s British party conference season when investors will be watching for any disagreements internally within the ruling Conservative party. On a trade-weighted basis, sterling was trading at 75, its lowest level since November 2016.

While market analysts say sterling remains among the most undervalued currencies on a trade-weighted basis among its major rivals, the uncertainty around Brexit negotiations and the toll it is taking on the broader economy has discouraged investors from buying sterling-denominated assets.