The investment has gone to PremFina, Ieso Digital Health and Verve 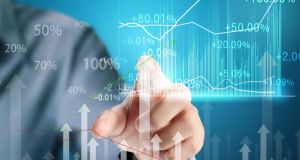 “We are now in a position to invest larger amounts in investee companies and retain the ability to hold and grow these companies for much longer than our non-listed competitors can.” Photograph: iStock

Funds committed by the Irish-listed company in the four-month period to the end of September reached £38.5 million (€43.1m) following on from the £100 million (€112m) raised by Draper Esprit in June. Three benefactors of a portion of that money were flagged by the company in a statement on Tuesday.

Between them the three companies have recently completed fundraising to the tune of around $75 million (€63.7m).

“We want to help build large successful European technology companies that can compete on the global stage, and all three of these recent investments have that potential,” said Simon Cook, Draper Esprit chief executive.

“We are now in a position to invest larger amounts in investee companies and retain the ability to hold and grow these companies for much longer than our non-listed competitors can.”

In a note to clients Goodbody analyst Gerry Hennigan said the investments clearly demonstrated “progress towards portfolio addition/expansion” and the subsequent deployment of the company’s net cash balance of £24.9 million (€27.8m).

In addition to investing in the three European businesses, Draper co-led both the $36 million (€30.5m) equity and debt facility round in PremFina and the £18 million (€20.1m) funding round in Ieso.

1 Boeing identifies new software flaw in grounded 737 Max
2 Dublin housebuilder records €11m gain after striking deal with bankers
3 Barclays to cut 100 senior roles as lender seeks to rein in costs
4 Irish people like nothing more than being bribed with their own money
5 GoMo is being investigated by advertising authority
6 The Irish economy is thriving but if you’re not feeling it – here’s why
7 Real price of cheap credit? Unaffordable homes
8 Slack lease the lure as ESB seeks €168m for Fitzwilliam 28
9 Labour Court expected to rule on Paddy Power workers’ claim
10 Festive season boosts footfall at Arnotts and Brown Thomas
Real news has value SUBSCRIBE