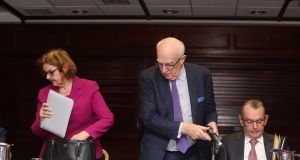 The actions of the board of Conroy Gold were “complete manipulation” in favour of the board, a shareholder told an emergency general meeting (egm) on Friday.

Bernard McEvoy, a solicitor for dissident shareholder Patrick O’Sullivan, told the Conroy Gold and Natural Resources egm that the actions of the board earlier this week, whereby they exercised warrants in the company, was “gerrymandering of a vote register” and a “gross breach” of the board’s fiduciary duty.

The meeting was called at the behest of Mr O’Sullivan who sought to appoint three new directors – Paul Johnson, Gervaise Heddle and himself – and remove company chairman, Prof Richard Conroy, and director Maureen Jones from the board. All of the resolutions were defeated at the egm by between 945,428 and 989,208 votes. The total number of ordinary shares in issue is 12,213,537 and 9.19 million were cast at Friday’s meeting.

Earlier this week, Prof Conroy and Ms Jones exercised warrants for 400,000 shares between them – paying 7 pence above the market share price. Conroy Gold is quoted on AIM in London. The company also released 800,000 shares in return for funding for its Clontibret, Co Monaghan project.

Friday’s result comes after a drawn out battle between Mr O’Sullivan and the board of Conroy Gold after the minority shareholder initially sought to reduce the size of the company’s board and substitute some directors to accelerate the company’s Clontibret project.

“I never wanted to take control of the company,” Mr O’Sullivan told The Irish Times.

“I’m still a very loyal shareholder and I’m still supportive of the project,” he said. However, he continued: “I think the days of this company are numbered if he [Prof Conroy] stays.”

Asked whether he would consider selling his 26 per cent shareholding, Mr O’Sullivan said: “I can’t sell . . . If he [Prof Conroy] wins today, who’d want to buy into it”.

Prior to the egm, Prof Conroy sent a letter to shareholders saying: “Your current board (and previous board members) have been highly supportive over the last 10 years, investing more than €3.4 million in cash into your company in that period while in addition deferring the majority of their remuneration over the last few years.

Asked what he thinks will happen next, Mr O’Sullivan said: “The next port of call is that hopefully the company gets on and does what he [Prof Conroy] said he’ll do.”