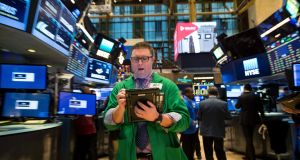 The New York Stock Exchange. The dollar index, which measures the greenback against a basket of six major rivals, hit its lowest level since January 2015 of 91.011. Photograph: Michael Nagle/Bloomberg

The US dollar hit its lowest in more than 2½ years against a basket of major rivals on Friday on the back of reduced expectations for another Federal Reserve rate increase this year.

Meanwhile, the euro spiked to multi-year highs in the wake of Thursday’s European Central Bank meeting.

The tone contributed to a push lower in safe-haven US treasury yields, which reduced demand for the dollar and knocked the greenback to a roughly 10-month low against the Japanese yen to 107.33 yen.

“What everybody is trying to do is price out any potential Fed hike for the remainder of this year,” said Dean Popplewell, chief currency strategist at Oanda in Toronto, and noted that traders had read Mr Dudley’s comments as being somewhat more dovish.

The dollar index, which measures the greenback against a basket of six major rivals, hit its lowest level since January 2015 of 91.011. While the index pared losses and was last down just 0.3 per cent at 91.419, it was still on course for its biggest weekly percentage decline since late June, of 1.5 per cent.

The euro rose as much as 0.6 per cent on the day to briefly hit its highest since January 2015 of $1.2092. While the euro gave up most of its gains, leaving the currency roughly flat against the dollar at $1.2027, it was still on track for a weekly gain of 1.4 per cent, putting it up more than 14 per cent this year against the dollar.

ECB president Mario Draghi referred several times on Thursday to the euro’s strength, and said it was the main reason for a cut in the bank’s 2018-19 inflation forecasts. He also indicated any winding down of its massive stimulus programme was likely to be slow.