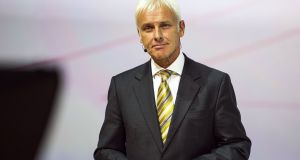 Matthias Muller to step down as CEO of VW.

Volkswagen is set to replace chief executive Matthias Müller in an unexpected move that signals a new chapter at the world’s largest carmaker following its diesel scandal.

The German carmaker’s supervisory board will vote on the management shake-up on Friday, according to two people close to Mr Müller. They said that Herbert Diess, head of the VW passenger car brand, would replace Mr Müller.

VW Group and Porsche SE, the carmaker’s parent, issued cryptic statements saying that they were exploring major changes that could include installing a new chief executive at VW. VW said that Mr Müller had “signalled his fundamental willingness” to accept the changes.

The two companies declined to comment further, although one said to expect another statement from VW in the near future.

Arndt Ellinghorst, an Evercore ISI analyst, said the only interpretation was that Mr Müller was preparing to step down. The move comes days after Deutsche Bank, Germany’s largest bank, replaced its chief executive, John Cryan, with Christian Sewing.

A long-time Volkswagen investor said the changes at the carmaker were less about the fall of Mr Müller and more about the rise of Mr Diess.

Mr Müller assumed the top role at Volkswagen out of a sense of duty during the most chaotic days in the company’s eight-decade history that followed the revelation that it had rigged hundreds of thousands of cars with emissions test-cheating software. The scandal has cost VW more than $25 billion (€20 billion )in the US, and litigation in Europe is ongoing.

Mr Müller left a secure job as the top executive of Porsche to lead VW out of crisis. In previous interviews, he made it clear that he saw his role as steadying the ship. His contract was set to expire in 2020. He has been explicit that he would not stay longer.

During his tenure, Volkswagen has overtaken Toyota to become the world’s largest carmaker by sales. He has pushed the group to become less complex and more decentralised.

Last year, he took a critical decision to spend €34 billion on electrification and self-driving technology, using the diesel scandal as a catalyst for big changes.

The two people close to Mr Müller said he was not being fired. They said that he had implemented the strategy that he had envisioned and was now willing to leave. But another person said that some people on VW’s supervisory board wanted change.

Mr Diess is the only serious candidate to succeed Mr Müller. A former hard-charging, cost-cutting executive at BMW, he took the reins of the VW brand, which is one of multiple brands in the group along with Audi and Porsche, in the summer of 2015.

Since then, Mr Diess has pushed aggressively to revamp VW’s profit margins and prepare it for a major shift to electrification without riling up its powerful unions.

Early in Mr Diess’s tenure, one former VW official said that his days looked numbered because he was fighting with the unions. “Changing the cost structure in Wolfsburg [VW headquarters] is like walking through the streets of Bogotá looking for drug dealers without a weapon,” this person had said. “It’s suicide.”

A senior executive at the German carmaker described the job of running the VW brand as the “toughest job in the leadership”. He added that Mr Diess had “managed to do that by being direct and uncompromising”.

“Diess’s currency in the firm, with the board, with the unions, is really high,” the long-time investor said. “He’s not unhinged, he’s not slipshod, he’s very measured, even if he doesn’t have the best interpersonal skills. He’s won everyone over.”

Investors welcomed the news, with Volkswagen shares closing up more than 4 per cent.