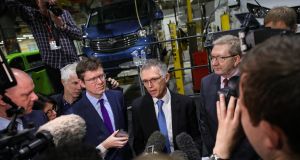 Carlos Tavares, chief executive officer of PSA Group, speaking at the firm’s plant in Luton. The French carmaker PSA Group plans to end a venture between its Vauxhall brand and rival Renault SA that makes vans at a plant near London

The parent of Peugeot, Citroën, Vauxhall and Opel will continue to build its vans at Vauxhall’s Luton plant following investment from the British government intended to guarantee the facility’s competitiveness after the UK leaves the EU.

French carmaker PSA is looking to consolidate manufacturing operations across its factories after taking over loss-making Opel-Vauxhall from General Motors last year.

On Wednesday, it said that the Vauxhall plant in Luton will manufacture new Opel and Vauxhall Vivaro vehicles from next year until at least 2029, using tools that will allow it to also assemble Peugeot and Citroën vans at the site in the future.

PSA said it was investing £100 million in the plant, including £9 million of investment from the UK government.

Britain’s car and van plants are heavily dependent on access to the EU, with 80 per cent of vehicles produced in the UK exported and more than half going to the EU. More than half the parts that go into UK-made cars come from overseas

PSA’s decision will safeguard 1,400 jobs at the Luton plant, and may lead the business taking on more staff if output rises to 100,000 vans a year as planned. The plant produced 59,000 vans last year.

Close to two-thirds of vans manufactured at the Luton are exported. The company has said it wants to increase the amount of UK-sourced components it uses in its vans. Forty per cent of components in Vauxhall vans are currently sourced from the UK.

Carlos Tavares, the chief executive of PSA, previously said that Opel’s manufacturing sites, which include Vauxhall’s two plants in the UK, suffered from “complacency” when managed by GM. Mr Tavares has also said the operations needed to start making money to survive.

Speaking on Wednesday, he said: “This is a major milestone for the future of the Luton plant and a key enabler to serve our ambitions in the commercial vehicle market, guaranteeing customers the best offering in the segment.”

While PSA considered making Vivaro vans in Germany and Poland, the UK site had a natural advantage because it already houses a paint shop fitted to produce van-sized vehicles – an operation that would be expensive to set up elsewhere.

“The investment in upgrading the production platform will safeguard and grow jobs, ensuring the future of the Luton plant well into the next decade and help ensure the plant is well positioned for future Vauxhall models to be made in the UK.”

Wednesday’s announcement provides a boost for UK van manufacturing, which has been in sharp decline in recent months.

UK van manufacturing fell by 16.7 per cent last year, with vans for the domestic market down by 25 per cent and vehicles for export down 10 per cent year-on-year.

Of the 78,000 commercial vehicles made in Britain last year, more than 62 per cent were exported.

1 In this strangest of recessions, what happens next for Ireland?
2 Michael O’Leary is the boss you want to lead an airline out of crisis
3 Bank of Ireland sees about 2,000 staff apply for voluntary redundancy
4 Estée Lauder staff at Dublin airport plan further strike action
5 Ireland’s Covid-19 economy in five graphs
6 Best Covid-19 ‘influencers’ will avoid hectoring
7 Dunnes Stores set to enter grocery delivery market
8 Overhaul of lease arbitration regime would be a game changer for retailers
9 Should I switch bank now with Ulster Bank at risk of closing?
10 Irish company to test vaccines on volunteers deliberately infected with Covid-19
Real news has value SUBSCRIBE