Who will lead the car industry in a time of big changes? 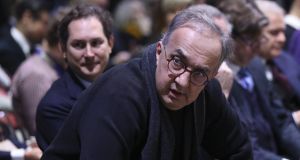 Fiat CEO Sergio Marchionne: his ‘rock star’ status will make it difficult for FCA to find a successor for the long-time CEO. Photograph: Chris Ratcliffe/Bloomberg via Getty Images

Who should sit in the driving seat of the world’s carmakers? The question of who will lead their businesses into the future is coming to a head for several of the world’s largest groups, just as motor manufacturing faces an era of intense change, with the need to embrace new business models and invest in new technologies while keeping the old engine running.

“We are facing a generational change,” said Ralf Landmann, a senior headhunter at Spencer Stuart.

New leaders will have to steer cumbersome and oil tanker-like businesses through a ferociously competitive and deeply cyclical industry, as well as bridging the culture chasm between engineers and the increasing number of technologists in their ranks.

Fiat Chrysler (FCA), the Renault-Nissan-Mitsubishi Alliance, Mercedes-Benz owner Daimler, Volvo Cars, Jaguar Land Rover and Toyota are all due or likely to need to consider succession in the next few years, whether from contracts expiring or legally enforced age restrictions at their companies.

The first of these is Fiat, which will name a successor to long-time chief Sergio Marchionne this year.

The challenge for FCA is exacerbated by the “rock star” status of Marchionne, whose tenure and impact means he has become the virtual embodiment of the company.

The Renault-Nissan-Mitsubishi Alliance faces a similar conundrum when it comes to finding a successor to Carlos Ghosn.

Earlier this year, he was reappointed as Renault chief executive.

Both Marchionne and Ghosn are renowned for a nomadic lifestyle that sees them often sleeping only on private jets or in chauffeur-driven cars as they oversee vast, sprawling empires built in part by them over decades.

“Their management style has had such an impact on the organisation for the past 10 years,” said one recruiter who has worked with both men.

Yet while FCA has indicated Marchionne’s successor will be internal, there is a growing body of thought that says the next generation of executives will probably come from outside the sector altogether.

“It’s entirely possible the next great automotive leader will be someone no one in the industry has heard of yet,” said Chris Donkin, head of industrial and technology practice at executive search firm Inzito.

“It’s becoming increasingly clear that the approach that has generally served the industry reasonably well over the last 100 years, which is to appoint as CEO either the most technically gifted engineer or the most commercially adept finance guy, is not going to be enough.”

Indeed, historically, some of the most successful names in the business have come from outside the often-insular automotive world, from Ford’s former chief executive Alan Mulally, a Boeing alumnus, to Fiat’s Marchionne, who started his career as a chartered accountant and tax specialist for Deloitte & Touche in Canada.

Early in his tenure Marchionne said the greatest asset he brought to the role was knowing nothing about the industry.

Last year Ford, hoping to emulate or better its Mulally era, became the first carmaker to appoint a new leader from outside the industry with the specific aim of steering the company through transition, naming former Steelcase boss Jim Hackett as chief executive.

“I was looking for somebody that could do two very different things simultaneously,” said Bill Ford, chairman of the family-backed carmaker, referring to the job of running a company while building a new business within it.

“Each one is hard enough in of itself. To do them at the same time, that requires special leadership.”

The rationale was that Hackett, already head of Ford’s future technology arm, led Steelcase through the waters of disruption for the office furniture business, and would apply the same rigours to the carmaker.

The move, however, has polarised the car world, with some executives praising the choice as visionary, while others privately mock the decision.

The question of gender is also a key one for the industry, whose executive positions are dominated by men.

Despite being among the most globalised industries in the world, the car sector remains firmly nationalistic when it comes to appointing leaders

While the sector draws from a pool of engineering talent that is historically heavily male, this may change as more leaders come into the industry from other businesses.

Indra Nooyi, chief executive of PepsiCo, was briefly considered for the position of Tata Group’s chairman.

Another problem recruiters may face are nationality constraints on their choices for new leaders. Despite being among the most globalised industries in the world, the car sector remains firmly nationalistic when it comes to appointing leaders.

Currently the three German carmakers are led by Germans, Italy’s Fiat by an Italian, both Sweden’s Volvo Cars and truckmaker Volvo Group are led by Swedes, Japan’s Honda, Toyota and Nissan have Japanese chief executives and US companies Ford and General Motors are both under American management.

When France’s Renault came to choose a chief operating officer, who would run the business in all but name and is seen as the most likely potential chief executive successor to Ghosn, it selected Frenchman Thierry Bolloré, partly at the behest of the government.

This fits oddly with the rigours of running a business with operations in most countries on earth, where leaders face the task of enthusing the company’s employees, from the youngest coder in the carmaker’s Californian operation to its oldest German engineer. This requires “cultural dexterity”, said Donkin.

Yet for Ghosn, occasionally dubbed “Davos man” and possibly the ultimate example of cultural deftness, leadership remains about results.

“Nothing else prevails in our industry.”

FCA, which has risen from debt-riddled carmaker to overtaking Ford in profitability this year, knows this all too well.

But personality remains a driver, said one person who has worked with Marchionne in the past.

“Even if Superman arrived at FCA’s headquarters, he would have difficulty stepping into those footsteps.”

Enduring mystery of those missing magical cars continues to baffle
4

Roof with a view at bijou canal cottage for €350k
5