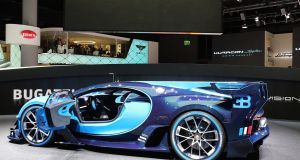 The Bugatti stand at the IAA Frankfurt Auto Show

Volkswagen is close to selling its Bugatti supercar brand to Croatian electric car maker Rimac Automobili, CAR Magazine reported, a move that would mark the start of an overhaul of the German manufacturer’s luxury car portfolio.

Volkswagen executives greenlighted the deal last week, but it still needs supervisory board approval, the magazine said on Thursday, citing unidentified people familiar with the matter.

Bugatti will likely be transferred to Rimac via VW’s Porsche brand, which already owns a 15.5 per cent stake in the Zagreb-based company, in exchange for a bigger share of the firm, according to the report.

Spokespeople for Volkswagen and Rimac declined to comment to Bloomberg.

Bugatti, which sold 82 vehicles last year, has long been viewed as a prime example of Volkswagen’s engineering extravagance. In 1998 it was revived under former chairman Ferdinand Piech after the brand had largely faded from existence in the 1950s.

Because of high development costs and low volumes, the 16-cylinder Veyron – Bugatti’s first model under VW control – was considered one of the biggest money losers in the auto industry. Volkswagen does not break out financials for the brand.

Bugatti has recently pursued efforts to potentially survive outside the German auto group, and head off the risk of being phased out once again.

Since the 2015 diesel-cheating scandal, Volkswagen has been taking a closer look at its portfolio, with a focus on expensive luxury car brands amid the growing burden of investing in electric mobility and self-driving technology.

Bloomberg had previously reported that the carmaker was weighing options for the Lamborghini unit.