‘Deutschland rocks’ but not if you’re BMW 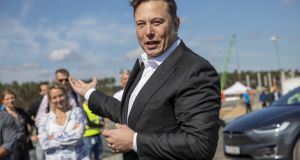 Elon Musk talks to the press as he arrives at the construction site of the new Tesla factory near Berlin. Photograph: Maja Hitij/Getty Images

If the German car industry’s obituary is written sooner rather than later, the last days may feature as a symbolic turning point.

This is a cautionary tale of how a domestic industry with a lot of collective history was lapped – again – by a US rival with a lot of future.

On Tuesday chief executives of Germany’s powerful car companies held yet another “Auto Summit” with chancellor Angela Merkel. It didn’t go well for them. The Covid-19 pandemic has plunged the German car industry into an existential crisis. Sales slumped in August by a fifth, erasing a slow recovery in the previous months. The VDA industry lobby group expects production to drop by a quarter this year. BMW has announced job cuts, VW has reduced its dividend after losing €2.4 billion when the lockdown closed factories and showrooms.

After months of hard-nosed lobbying, industry figures were hoping for another cash-for-clunkers scheme, similar to a decade ago, to sweeten a new car purchase. They wanted a premium for cleaner petrol and diesel cars and even double subsidy for anyone buying an electric or hybrid model.

“We won’t be doing that,” said an unusually blunt Dr Merkel, according to participants at the video conference.

The final communiqué made no mention of any sweetener scheme and took no firm decisions. Instead there were vague, aspirational noises about Germany becoming a leader in autonomous driving.

“Germany should remain a leading global location for the auto industry of the future,” it concluded, “that is open to technology.”

Nine days earlier, the mercurial Tesla boss Elon Musk was welcomed to Germany with the kind of excitement usually reserved for David Hasselhoff.

Unlike the German car bosses, he got a face-to-face meeting with Dr Merkel and her economics minister, Peter Altmaier who was reportedly was so excited he told the entrepreneur: “You’ll have every assistance you need.”

Musk was in town for the topping out ceremony for his first Tesla “Gigafactory” in Europe, 40km east of Berlin.

“Deutschland rocks,” the billionaire told waiting journalists at the site of the €1.1 billion plant. “We want to create something great here: good jobs and a great atmosphere, even a train station. It’s great for Berliners who will work here.”

At least 12,000 people are expected to be employed here, though the local state of Brandenburg says that number could rise to 40,000 when service providers are added.

From next year, an estimated half a million Tesla Model 3 and Y cars are expected to roll annually off the production line.

Musk announced the factory last November and 10 months later, with a speed more typical of a Tesla Model X than German planning law, the forest site has been cleared and the plant is on course to open next year.

Local politicians in the state of Brandenburg have already named the factory approach road “Tesla Strasse” and welcomed the billionaire as a particular blessing to an already weak state in the pandemic slump.

“This is a one-off chance that people here don’t end up in unemployment but can work in a growth market,” said Jörg Steinbach, Brandenburg’s state economics minister.

At the end of his trip Musk made a surprise detour to meet Volkswagen chief executive Herbert Diess. With Diess in the passenger seat, Musk gave the German firm’s mass market ID-3 electric car a spin at Braunschweig airport. The Tesla founder jetted off in a cloud of poisoned praise: “For a non-sports car it’s quite good.”

Given the dust whirling from the Musk Gigashow, the Auto summit was a limp affair. Instead of purchase sweeteners, public money is to be funnelled into the crucial industry suppliers, small- and medium-sized companies in Germany that deliver many of the key components for the leading car companies.

The urgency for this became clear just hours after the summit when leading supplier Schaeffler said it was cutting 4,400 jobs to survive.

Chief executive Klaus Rosenfeld said that job cuts and factory closures to save €300 million annually were “unavoidable” for the Bavarian-based firm to survive the crisis.

With the German car industry facing an existential crisis, expert Ferdinand Dudenhöffer is gloomy about its future. He expects a quarter of industry suppliers will go under while it will “last a long time before the industry reaches its earlier level”.

By then, the game will have changed. Tesla will be up and running east of Berlin and the cosy German car industry will have a new, uncomfortable player.

The Bild tabloid, swinging between Muskphoria and Autosummit gloom, warned this week that “something’s wrong in Autoland Germany”.

German cars remain solid but uninspiring, it said, and overshadowed by the fraud and scandals of their builders.

“A piece of the German soul,” it warned, “is being lost.”

1 FinCEN Files: Dublin business features in leak of US treasury documents
2 Aldi empire wracked by family feud
3 A look at Elon Musk’s track record ahead of Tesla’s ‘battery day’
4 Chris Johns: We’re in for a triple whammy of Covid, Brexit and the US elections
5 The FinCEN files: Unchecked by global banks, dirty cash destroys dreams and lives
6 Dublin-based Fenergo considers $1.5bn listing
7 How to . . . move (almost) everything to your new phone
8 Rolls-Royce plans to raise up to £2.5bn as Covid-19 bites
9 Facebook may pull social media platforms from Europe
10 NatWest considers closing Ulster Bank in the Republic
Real news has value SUBSCRIBE