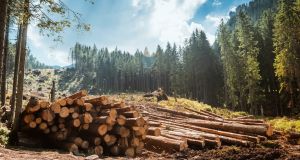 The timber industry is at “breaking point” with thousands of jobs at “imminent risk”, the boss of State-owned forestry business Coillte has warned, as the Government drags its feet in introducing new legislation.

Shovel-ready tree-felling projects have ground to a halt in the Republic as a result of delays in a Government appeal mechanism for such projects. The delay has led to a substantial timber shortage in the State, with many workers in the sector facing the prospect of reduced hours or redundancy.

Specifically, the industry has complained that appeals to the granting of tree-felling licences are not being dealt with quickly enough by the Department’s Forestry Appeals Committee (FAC). The issue is that under legislation introduced in 2017, appeals to licences must be heard by a committee headed by the chairman of the FAC. It has become apparent, however, that when the legislation was introduced, the volume of appeals that would follow weren’t anticipated.

This year, 382 appeals have been made. Only one of those has been heard so far this year. In total, there are about 500 appeals outstanding with a roughly two-year backlog now created, according to figures collated by lobby group Forest Industries Ireland.

Coillte chief executive Imelda Hurley said the crisis, which has been ongoing for almost a year, has now reached a point “where there is real risk of serious long-term damage to the entire timber industry”.

“Right now, Coillte’s timber supply for the remainder of 2020 and 2021 is under severe threat and our only likely source of immediately available volume is from the Forestry Appeals Committee,” she said.

While the Government is in the process of amending the legislation to provide for a better resourced FAC, Ms Hurley warned that it needs to be resourced as soon as the body is established so the backlog of cases can be dealt with.

The Department of Agriculture did not respond to request for comment.

About 12,000 people are directly employed in the Republic’s timber industry, with a further cohort working as contractors. Coillte supplies about 75 per cent of the timber output in the State.

Niall Granger, managing director of GP Wood, a sawmill based in Co Cork, noted that 90 per cent of licences are being upheld on appeal. “We have to get the FAC moving,” he added, noting that “we’re going to run of out of timber”.

At Mr Granger’s GP Wood, staff will soon be placed on a three-day working week so that the company’s supply of timber can be processed without it running out of product.

“If the FAC doesn’t get more timber out we’ll have to go to a two-day week or start shutting doors.”

The problem for Mr Granger also lies in the fact that many of his employees are highly skilled and not easily replaceable if they do decide to move on given the current crisis. Between his own directly employed staff and contractors, there’s about “500 jobs on the line”, he said.

Mark McAuley of Forest Industries Ireland noted that in addition to the projects tied up in the appeals process, there are about 1,800 files in the initial application process.

“So there’s a huge delay in getting your licence in the first place and that’s before somebody can then appeal it,” he said.