Aircraft and train manufacturer worth just a fraction of former value 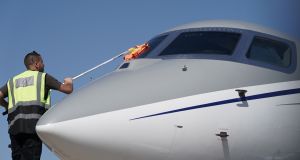 Bombardier is facing the boot from Canada’s main index as it slides toward irrelevance for equity investors.

The aircraft and train manufacturer’s share price has been below one Canadian dollar since early March, potentially making it ineligible to stay in the S&P/TSX Composite Index and, in turn, the S&P/TSX 60 Index of large companies.

To be included in the composite, a company must have a minimum volume-weighted average price of C$1 over the previous three months, as well as over the last 10 trading days of the month prior to the index provider’s quarterly review, according to S&P Dow Jones index methodology. For Bombardier, that average price is now sitting at about 53 Canadian cents for the three months leading up to June.

A departure from the index could hurt demand for Bombardier’s shares as exchange-traded funds drop the stock.

Bombardier’s shares have continued their downward spiral despite a corporate revamp initiated by former chief executive Alain Bellemare. The stock has lost almost all of its value in 20 years.

The Montreal-based company, which employs around 3,600 people in Belfast, was once seen as a Canadian champion of the industrial sector and a source of pride for Quebec. It made everything from snowmobiles to commercial aircraft but is now a shadow of its former self after ceding its marquee jet program, now known as the A220, to Airbus and agreeing to sell its rail business to French train maker Alstom in the face of more than $10 billion in debt.

Mr Bellemare’s restructuring means Bombardier has made an all-in bet on the corporate jet market. That left the company, now led by Eric Martel, particularly exposed as the coronavirus pandemic shuttered travel globally and slashed corporate spending. Still, it’s possible that sales of private jets, which allow for physical distancing among passengers, may come back faster than commercial travel.

Last week, the company announced that it plans to eliminate 2,500 jobs at its aviation division following a slump in demand for business jets. In quarterly financial results released May 7th, Bombardier said it’s bracing for a drop of at least 30 per cent in sales of private jets as the crisis pummels demand this year. – Bloomberg

1 Covid-19 has distracted us from the looming threat of Brexit
2 Two men face fraud charges over £1.2bn sale of Nama’s NI loans
3 Wifi problems? Quick tips to get your home internet out of the slow lane
4 AIB defends ‘incredibly’ high €1.2bn loans charge as 2008 haunts
5 Project Eagle: What was it and why is it in the news?
6 TikTok to invest $500m in data centre and create ‘hundreds of jobs’
7 Lucy Kellaway: Poolside working no longer a sign of importance
8 How safe is it to go back to the office?
9 Italy threatens Ryanair flight ban for alleged Covid-19 violations
10 Sacrificing pubs for schools: Ireland’s latest Covid trade-off
Real news has value SUBSCRIBE

Lucy Kellaway: Poolside working no longer a sign of importance 29 Aug
Project Eagle: What was it and why is it in the news? 20:13
Stocks decline on poor corporate earnings 17:44
AIB defends ‘incredibly’ high €1.2bn loans charge as 2008 haunts 17:31
Microsoft now looking to acquire TikTok’s entire global business 16:57
Search executive
jobs on irishtimes.com