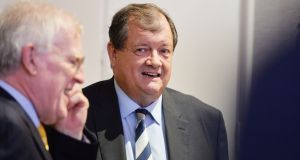 Glass and metal containers-maker Ardagh more than doubled the size of a proposed €350 million bond sale on Friday, raising €790 million to redeem existing debt. The new 2026 notes carry an interest rate of 2.25 per cent. Proceeds from the deal, after expenses, will be used to fully redeem €741 million in notes due in 2024 at a rate of 2.750 per cent.

The company, led by Dublin financier Paul Coulson, will also use the cash to pay accrued interest and redemption premium.

Ardagh is among the most opportunistic Irish-run companies at refinancing debt as windows open in the market. It has refinanced some $3.3 billion since April.

“Ardagh is delighted with the very strong support we received in today’s upsized transaction,” Paul Coulson said. “Following our capital markets activity of recent weeks we have no bond maturities before 2025, a weighted average debt maturity of six years and we have significantly increased our liquidity.”

Ardagh pulled its full-year financial forecasts earlier this year amid economic uncertainty even though demand for its products has generally remained strong to date.