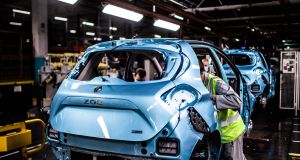 Renault plans to eliminate 14,600 jobs worldwide and lower production capacity by almost a fifth as part of cost reductions aimed at outlasting the downturn that has rocked the global auto industry.

The plan includes cutting almost 4,600 positions in France, or about 10 per cent of the carmaker’s total in its home country, through voluntary retirement and retraining, according to a statement on Friday.

More than 10,000 further jobs will be scrapped in the rest of the world. Renault employs 180,000 people globally.

To achieve savings of more than €2 billion over three years, the plan will cost about €1.2 billion to implement.

Renault flagged possible adjustments to capacity in Russia, but held off on decisions about the future of six sites in France amid political furore and union opposition, saying that talks will begin on various scenarios, including phasing out car assembly at the Flins and Dieppe plants.

The measures will cap a decisive week for Renault and its Japanese partners Nissan and Mitsubishi Motors as they navigate a slump in consumer demand and factory shutdowns spurred by the coronavirus pandemic.

The French carmaker’s proposals come on top of one by the three-company alliance to lower development and production costs, abandoning the emphasis on growth that marked the era of Carlos Ghosn, who led the alliance for almost two decades before his arrest in late 2018.

The government in France plans to boost vehicle sales with consumer incentives and a cash-for-clunkers scrappage programme.

Renault has been at the centre of a political maelstrom in recent weeks over its plans to downsize in France while at the same time seeking a state-backed loan of €5 billion to bolster reserves.

French finance minister Bruno Le Maire warned on Thursday he would not sign the cheque until he had examined the company’s strategy “site by site, job by job”, with closures being “a last resort”.

At the same time he said Renault’s manufacturing capacity is roughly three times what is needed this year.

The government is Renault’s most powerful shareholder and has representation on its board. In exchange for the auto-industry stimulus package, the state has called for manufacturers to commit to keeping production and research in France.

Renault and rival PSA have pledged to increase local production of electrified vehicles and components.

“If we do nothing, Renault is in danger,” Mr Le Maire has said.

To qualify for the government’s support Renault scrapped its dividend. It burned through €5.5 billion in the first quarter, bringing its liquidity down to €10.3 billion at the end of March.

1 Belgium helps Ireland to a Brexit boon
2 ‘My rent here is so low it’s a joke’
3 Can Grafton Street stop the flood of closures?
4 AIB to compensate another 1,100 tracker mortgage holders
5 Two Irish entrepeneurs shortlisted for leading innovators prize
6 Goodbody’s planned €155m sale to Bank of China falls through
7 Big Four told to outline plans for audit split in UK by October
8 Irish tech firm to facilitate cashless tickets for hurling and football
9 Tourism heads for choppy water with two Green Ministers at the helm
10 My generation: discounts and privileges
Real news has value SUBSCRIBE