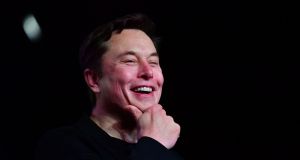 Tesla said on Tuesday it plans to raise up to $5 billion through a share sale programme to be conducted by Wall Street’s main brokerages.

The sales agents include major banks such as Goldman Sachs & Co, Bank of America Securities, Citigroup Global Markets and Morgan Stanley & Co, the electric carmaker said in a filing.

Tesla shares, which rose about 8 per cent in early premarket trading, were up about 3 per cent after the news.

The move comes a day after a five-for-one stock split took effect, Tesla’s first since its initial public offering about a decade ago.

The company’s high-flying stock has soared over 70 per cent since its split was announced on August 11th, and was trading at over $2,000 on Friday on a split-adjusted basis. The stock was one of the costliest on Wall Street. – Reuters