Bayer shares jump as it reviews legal strategy on weedkiller 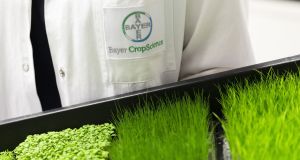 Bayer, which is battling more than 13,000 cases alleging its weedkiller glyphosate causes cancer, said on Thursday that it was setting up a special supervisory board committee to examine its legal strategy and appointed a high-profile lawyer to advise on trial tactics and mediation. Photograph: Alex Kraus/Bloomberg

Shares in Bayer jumped more than 8 per cent on Thursday, after the German chemicals and pharmaceuticals group suggested it might be open to a settlement aimed at ending its costly legal battle over glyphosate-based pesticides in the US.

The shift was welcomed by activist investor Elliott Advisors, which on Wednesday confirmed that it had built a stake in Bayer worth €1.1 billion as the company grapples with the lawsuits.

Bayer has been under fierce pressure since August last year, when a California jury ruled that a glyphosate-based pesticide, Roundup, owned by the company was responsible for causing the plaintiff’s terminal cancer. The jury went on to award damages of $289 million (€254m), a sum that was subsequently reduced but which triggered an avalanche of similar cases.

The company faces more than 13,000 glyphosate-related cases. US juries ruled against the group in two further trials this year, the latest of which involved damages of more than $1 billion each for two plaintiffs.

Bayer insists that glyphosate is safe, and until this week ruled out any suggestion that it might be ready to reach a settlement. That stance appeared to shift on Wednesday, however, when Bayer announced it was setting up a special supervisory board committee to examine its legal strategy and appointed a high-profile lawyer to advise on trial tactics and mediation.

The statement was understood by analysts and investors to be a clear sign that Bayer is no longer strictly opposed to an early settlement.

The stock remains down more than 30 per cent year-on-year, however, a decline that has sparked fury among shareholders and triggered speculation that Bayer could face pressure from activist investors such as Elliott to take steps including appointing new management or breaking itself in two.

Bayer’s market capitalisation remains below the $63 billion it paid to acquire Monsanto last year, the takeover that landed Bayer with the glyphosate-based pesticide that is at the centre of the legal battle.

Bayer said: “The supervisory board recognises the negative effect the litigation uncertainty has had on the stock price and stakeholder perception, and is determined to help the company decisively but prudently advance the matter.” – Copyright The Financial Times Limited 2019

1 Why gift a son now if it eats into his tax-free inheritance threshold?
2 Flights abroad ban could last all summer
3 Government to avoid ‘cliff-edge’ on Covid-19 payment changes
4 Chris Johns: Economic self-harm is the root of populism
5 How much do Irish people earn? And what will Covid-19 do to our wages?
6 Why are markets booming when a crash is on the way?
7 You now get almost nothing for your money . . . but it could be worse
8 British pound sinking to ‘emerging market currency’ status
9 Brexit: System agreed for Irish goods to skip checks on UK trade
10 Ten of the most mysterious aircraft disappearances
Real news has value SUBSCRIBE