Before leave vote 90% of Galway stair firm’s business went to UK, it almost went under 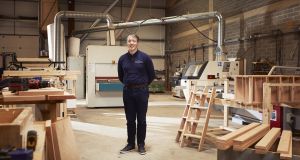 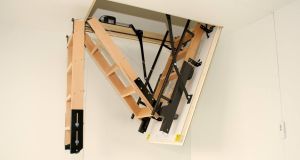 A €1 million a-year manufacturing business that almost collapsed after UK voters chose to leave the EU expects production to multiply tenfold in the next few years.

Peter Morrow, chief executive of Galway-based Skylark, which produces electric folding attic stairs, said at the weekend he hopes the business can expand to produce 5,000 units annually over the next three to four years from its current 500.

The plans are a big step from two years ago, when orders virtually dried up following the Brexit referendum on June 23rd, 2016. “It was pretty dramatic,” Mr Morrow recalls.

“After the 24th of June, it was the 2nd or 3rd of August before we got our first sale. The business almost fell off the planet.”

Mr Morrow founded Skylark Electric Attic Stairs in 2011, finding a ready market in Britain, where it cashed in on demand for the automated ladders, particularly among older people who were finding manual versions difficult to manage.

Consequently Skylark virtually ignored the domestic market to focus on Britain. This meant it depended on the territory for 90 per cent of its sales by the time the Brexit referendum came along.

Sterling’s collapse following the result sparked anxiety amongst elderly customers about their incomes, so they reined in spending, hitting Skylark’s business hard.

Mr Morrow turned to the Galway Local Enterprise Office, headed by Breda Fox, which gave Skylark a grant so it could get to the US to talk to Marwin, a company in the same business that was interested in the Irish firm’s stairs.

Marwin launched it in the US at a trade fair the following January and by March Skylark was shipping its first orders across the Atlantic. “That saved us,” Mr Morrow acknowledges.

Galway’s enterprise office also provided aid in the shape of a process engineer who helped the company streamline its production, saving time and cutting costs.

Skylark now turns over about €1 million a-year and recently spent money on adding new machinery to its Galway plant, where it employs five people.

Britain has recovered, but accounts for just half the business. Skylark also sells to the US, Belgium, where Morrow sees a lot of potential, and is on the verge of entering Canada.

The Galway operation buys all the materials it uses locally, except the motors fitted to the ladders. The company purchases these from a British manufacturer that ironically supplies them from a base in Denmark which it opened to avoid Brexit’s negative fallout.

Mr Morrow calculates that the recently-bought machinery should give the company the capacity it needs to expand. The business will be hiring more staff and could soon need a bigger premises.

Its chief executive makes it clear that the company will manage its growth carefully, taking one step at a time.