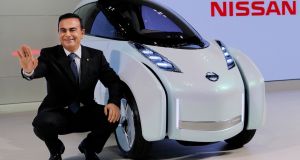 Carlos Ghosn (64) has been detained in Tokyo since his November 19th arrest.

Japanese prime minister Shinzo Abe and French president Emmanuel Macron were arranging to meet on the sidelines of the G20 summit meeting, media said, amid signs of a brewing diplomatic feud over the power balance at the troubled Renault-Nissan alliance.

The 19-year partnership between Renault and Nissan is facing its biggest test to date after the arrest this month of its larger-than-life leader, Carlos Ghosn for suspected financial misconduct.

Ghosn (64) has been detained in Tokyo since his November 19th arrest, and prosecutors are widely expected to seek a maximum 10-day extension of his detention.

If the court approves, authorities will have to file charges by December 10th or arrest him on suspicion of fresh crimes to keep him in custody.

Ghosn’s detention in Tokyo has left the Franco-Japanese auto alliance without a leader and an advocate for the French government, which has said it wants to retain the current capital structure.

A few days later, however, Le Maire said on French television that he and Seko agreed that keeping the alliance’s current capital structure was desirable - an agreement the Japanese minister denied making.

The Mainichi Shimbun daily reported on Friday that Seko had sent a rare letter of protest to Le Maire for the remarks. Officials at Japan’s Ministry of Economy, Trade and Industry said they could not immediately comment on the reported letter.

Ghosn’s arrest, including for allegedly under-reporting his income, has triggered new attempts by Nissan to shake off what it considers Renault’s outsized control of it, adding to problems at Macron’s Elysee.

As economy minister, Macron had masterminded the French government’s surprise increase of its Renault stake in 2015, raising alarm bells inside Nissan that the Elysee was out to wield more influence over the Japanese company.

Macron has requested a meeting with Abe at the G20 summit starting on Friday, the Mainichi reported. A Japanese government spokesman said nothing had been decided.

The auto alliance, which also includes Japan’s Mitsubishi Motors, for its part “emphatically reiterated” its commitment to the partnership on Thursday after executives met in Amsterdam for the first time since Ghosn’s arrest.

A review of the capital structure was not discussed at the meeting, Mitsubishi Motors’ CEO Osamu Masuko said. – Reuters

1 US threatens retaliation against EU over proposed carbon tax
2 Comcast acquires Irish cloud-based telco Blueface
3 Toxic work cultures: You don’t have to put up with them
4 Abtran challenges award of €63m contract by Irish Water to rival company
5 Little strategic thinking in election manifestos of Fine Gael and Fianna Fáil
6 Who are Ireland’s 17 billionaires?
7 Five ways to create a culture of innovation in the workplace
8 It shouldn’t be hard for Irish companies to be less male
9 Anthony O’Reilly was almost €150m in the red in 2016
10 LinkedIn confirms plan for massive campus in Dublin city centre
Real news has value SUBSCRIBE