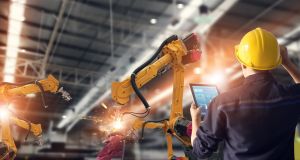 The rate of employment growth in Ireland’s manufacturing sector fell to a 14-month low in November, however, business conditions in the sector have improved for 66 consecutive months.

The IHS Markit Ireland manufacturing purchasing managers index (PMI)increased to 55.4 in November, up from 54.9 in October. The PMI is an indicator designed to provide a single-figure measure of the health of the industry.

A “marked increase” in new orders was central to the improvement in operating conditions in the market while growth of new work accelerated from October.

Manufacturers raised production for the 28th consecutive month in response to higher new orders while the rate of output expansion quickened in the month, the data shows.

And while workforce numbers rose for the 26th consecutive month during November, the rate of employment growth started to ease.

The industry is increasingly optimistic and 52 per cent of panellists were confident of a rise in output from present levels over the course of the next 12 months.

That was reflected in manufacturers increasing their purchasing activity at a “substantial pace” in November. The rate of expansion was the fastest in three months. Although, coupled with pressure on suppliers, this resulted in longer delivery times.

“As a result of this increasing demand within the sector, cost burdens remained elevated in November and inflation quickened to the highest in nine months.”

The IHS Markit manufacturers PMI is compiled from responses to questions sent to managers in a panel comprising around 250 manufacturers.