Pirelli to overtake AIB with largest European IPO this year 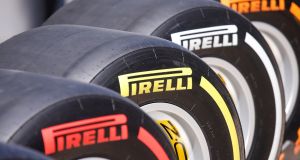 Pirelli, which supplies tyres for Formula One cars, will present details of its IPO, including a price range, as early as this week. Photograph: Maxim Shemetov/Reuters

Pirelli, the tyre maker that supplies Formula One race cars, is seeking an equity valuation of as much as €9 billion in its initial public offering (IPO), implying a trading multiple in line with Finnish peer Nokian Renkaat Oyj, people familiar with the matter said.

The Italian company will present details of its IPO, including a price range, as early as this week and plans to begin trading in Milan in the first week of October, said the people, who asked not to be identified as the details are private. The company has received strong demand from investors and is in talks with larger funds interested in becoming anchor investors for the deal, they said.

If it achieves a similar value to Nokian, Pirelli could become the largest IPO in Europe this year, potentially surpassing the €3 billion sale of Allied Irish Banks shares in May. Pirelli has said it’s planning to sell a 40 per cent stake in the listing next month.

Nokian trades at an enterprise value, which includes debt, of about 11.3-times expected 2017 earnings before interest, tax, depreciation and amortisation (ebitda), according to data compiled by Bloomberg. Pirelli reported first-half adjusted ebitda of €546.4 million.

As part of a Chinese-led takeover in 2015, Pirelli combined its industrial truck business with ChemChina’s tyre unit to focus on high-end tyres for consumer vehicles and to boost profit margins. Pirelli may also encourage investors to value the firm at comparable levels to other luxury Italian companies, such as handbag maker Salvatore Ferragamo and apparel firm Moncler, one of the people said.

A group led by China National Chemical bought Pirelli for about €7.4 billion in 2015, delisting the firm after nine decades on the stock exchange. The Chinese company and its partners plan to reduce their holding from 65 per cent to below 50 per cent in the IPO.

Pirelli chief executive Marco Tronchetti Provera will stay at the helm of the firm, which makes tyres for luxury car brands including Ferrari, McLaren and Bentley, until mid-2020 and will have a leading role in choosing his successor, the company has said. – (Bloomberg)