Performance of Irish plastics group in first half of year ‘encouraging’ 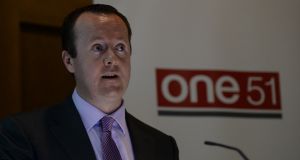 Alan Walsh, One51’s group chief executive, said that the first half of the year saw “very strong results” on the back of the IPL business in both the US and Canadian markets, while UK earnings were in line with expectations, despite being adversely affected by the fall in the value of sterling. Photograph: Cyril Byrne

Revenues at plastic packaging manufacturer One51 rose by 32 per cent in the first half of the year, as the group said it is eyeing up a stock-exchange listing over the next 12 to 18 months.

In the six months to June 30th, revenues rose to €225.8 million, primarily driven by strong organic growth in IPL, the group’s North-American plastics division, and the six-month contribution from Encore Industries, which it acquired in November 2016. Earnings (ebitda) were up 31 per cent to €32.4 million, and pretax profit rose by 37 per cent to €20.1 million. The group had net debt of €261.6 million as of the end of June.

Alan Walsh, One51’s group chief executive, said the first half of the year had seen “very strong results” on the back of the IPL business in both the US and Canadian markets, while UK earnings were in line with expectations, despite being adversely affected by the fall in the value of sterling.

“The group is currently investing heavily in expanding its production facilities in both the US and Canada in response to the very strong organic growth in those locations. Trading for second half of the year has started satisfactorily and we remain confident of delivering full-year results in line with market forecasts,” he said.

The group said its performance in the first half of 2017 was “encouraging” with strong organic growth in the IPL business, while the second half of the year had “started satisfactorily” and the group expected to perform in line with market expectations for the remainder of 2017.

Mr Walsh said the board had recommenced exploring a possible IPO, with a view to bringing the group to the stock market over the next 12-18 months. The strategy has the full support of the group’s largest shareholder, Caisse de dépôt et placement du Québec. It acquired a 25 per cent stake in the group earlier this year from businessman Dermot Desmond.

One51 said a stock-market listing would “provide shareholders with a liquid market for their shares and would facilitate raising further equity if necessary to support future growth”.

An IPO was also considered last year, but the plans failed to secure enough shareholder support. It is understood that One51 is now looking to list on the Toronto stock exchange, which could put a valuation of more than CAD$1 billion (€668 million) on the company. One51 shares currently trade on a grey market.