Group owns and operates 845 pubs, mainly in England and Wales 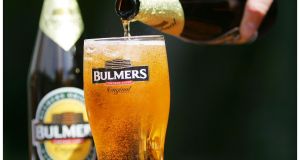 The deal will give the Irish drinks manufacturer ‘significant economic’ benefits in the UK market. Photograph: Bryan O’Brien

C&C Group said on Monday that it is to acquire the entire issued share capital of UK pub group Admiral, in a deal which will give the Irish drinks manufacturer “significant economic” benefits in the UK market.

Stephen Glancey, C&C chief executive, said the deal is “an attractive opportunity to create a new long-term investment in the important on-trade channel, without taking significant financial and operational risk”.

“The investment will provide our brands with improved distribution in some of the best community pubs across the UK, with an opportunity to enhance on-trade penetration further over time,” he said.

Bulmers producer C&C said it will pay £37 million (€40.3 million) for the investment, representing 47 per cent of the issued capital of Admiral, which will be funded from existing C&C facilities. The remaining equity is provided by Proprium Capital Partners and Admiral management. Admiral will be accounted for as an associate of C&C.

Admiral currently owns and operates 845 pubs, mainly in England and Wales, with a broad geographic distribution. The pubs are 95 per cent freehold or long leasehold, in predominantly suburban or city locations and are operated as a tenanted estate. The management team at Admiral will remain invested and continue to lead the business. Its latest financial figures show earnings (EBITDA) of £25.2 million and gross assets of £231.8 million.

The deal is expected to close by November 2017.