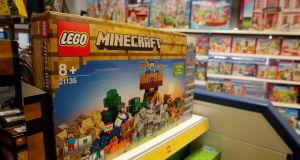 Lego will cut about 8 per cent of its 18,200 workforce, its biggest job cuts ever announced.

Lego has launched an overhaul of its business as it announced its first drop in revenues for more than a decade and 1,400 job losses.

Coming on top of the unexpected ousting of its chief executive last month, the news suggests Lego is facing its biggest test since it came close to financial collapse in 2003-2004.

Revenues fell 5 per cent in the first half of the year to DKr14.9 billion (€1.9 billion), ending near consistent double-digit growth over the past decade as Lego became the world’s most profitable toymaker and the second largest by sales.

Operating profit dropped 6 per cent to DKr4.4 billion, a similar decline to the first half of 2016.

Lego had long defied gravity as other toymakers succumbed to the trend for children to spend more time playing digitally. But under Bali Padda, who was ousted as chief executive in August after only eight months and who had previously been chief operating officer, it had become an increasingly complex organisation.

“The car has run a bit off the road and we are a bit stuck in the ditch. It will take a couple of years to get into the shape we want to be in. But it’s not a turnaround, it’s not a financial crisis,” said Jorgen Vig Knudstorp, Lego’s executive chairman.

Mr Knudstorp, who was chief executive until the end of last year, said he had to eat some “humble pie” and take some of the blame. “I’ve been at the company 16 years and there have been some pluses and minuses – this is a big minus.”

Lego will cut about 8 per cent of its 18,200 workforce – its number of employees has tripled since 2004 – its biggest job cuts ever announced.

The Danish toymaker came close to bankruptcy in 2003, but was rescued by Mr Knudstorp, who set the group on a remarkable growth path through the success of product lines such as Lego City and Star Wars.

Mr Knudstorp blamed rising employee numbers in recent years on an increase in bureaucracy and overlapping roles. “Suddenly the consumer, the shopper, the retailer is a bit too far from the top management.”

Outside experts say it became clear that Lego was struggling with its global operations, with weak sales in the United States and Europe for some time after unsuccessful product launches.

David Robertson, a Wharton School professor, said of the departure of Mr Padda: “Lego is a very performance-oriented company, and it may be that the company decided that it was time to make a change by letting go the person who was in charge of operations during the worst operational crisis of the past decade.”

Mr Knudstorp insisted that Mr Padda (61) had not been ousted because of the poor performance but because Niels Christiansen (51), incoming chief executive, had suddenly come on the job market after resigning as chief executive of Danfoss, a privately-held Danish industrial group.

He added that Mr Padda had led work on how Lego could return to growth and that Mr Christiansen had been informed of the plan. “It creates a platform for [Mr Christiansen] to begin his journey,” Mr Knudstorp said. – (Copyright The Financial Times Limited 2017)