Dublin Aerospace takes over Flybe’s aircraft servicing base in Exeter 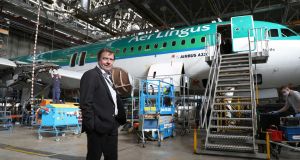 Dublin Aerospace employs up to 450 people, including about 100 seasonal contractors, in aircraft maintenance, repair and overhaul at Dublin Airport and at a facility in Ashbourne, Co Meath.

The company said on Tuesday that it had established Exeter Aerospace at the former Flybe Maintenance Services base at the airport in the southwest of England.

Exeter Aerospace is seeking to “immediately” hire 100 aircraft mechanics, engineers and aviation professionals to work at the new facility.

Dublin Aerospace chairman and chief executive Conor McCarthy said the Irish company had leased the hangars at Exeter formerly used by Flybe, which is in administration in the UK.

It also bought the tools and equipment used to service craft at the facility, he added.

Not only will Exeter be the Irish company’s first venture outside the Republic, but the move will also see it expand into servicing turbo-prop aircraft made by European company ATR and regional jets manufactured by Embraer.

Mr McCarthy explained that the commuter and domestic routes that these types of aircraft generally fly are likely to be among the first to recover from Covid-19’s impact on air travel.

“We see this as perfect timing,” he said. Mr McCarthy added that Dublin Aerospace had been looking for the right opportunity to expand beyond the Republic for four or five years.

Dublin Aerospace already specialises in Boeing’s 737 aircraft and the Airbus A320 and A330 models.

In a statement Mr McCarthy said the group was “thrilled” to have made Exeter its first UK base for maintenance, repair and overhaul.

“The availability of the hangars and workshops there, combined with a phenomenal pool of local aviation and engineering talent, makes this a hugely attractive location for us,” he said.

Mr McCarthy pledged that workers at Exeter would also take part in a group scheme under which it pays 10 per cent of its profits to employees every quarter.

The administrators who took over Flybe in February as the pandemic forced the regional carrier out of business are understood to be hoping to sell the airline eventually in some form.

1 Revenue publishes list of companies tapping State for wage support
2 Cosgrave Property Group secures exit from Nama
3 Grocery shopping app Buymie delivering for Devan Hughes
4 How long can Government afford to keep State pension age at 66?
5 107 jobs at risk as Broderick’s shareholder considers examinership
6 Irish homeowners must see rates relief if they make it through Covid turmoil
7 Developers may need to go back to the drawing board as one-beds fall from favour
8 Covid-19 will have a significantly worse impact on UK public finances than on ours
9 Corporate America is breaking with Donald Trump
10 Trump vs Biden: Stakes are high for the Irish economy
Real news has value SUBSCRIBE