Carmakers could be liable to pay extra 10% 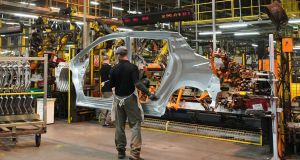 Japan’s two biggest automakers, Toyota and Nissan, will ask Britain to reimburse them for additional custom charges incurred if the UK government fails to reach a Brexit trade deal with the European Union, the Nikkei financial daily reported on Monday.

The companies want payments to cover the additional 10 per cent tax on automobile imports from Britain that the EU would impose should Britain crash out of the EU without an agreement, the Nikkei said, without citing sources.

Officials for the carmakers declined to comment on the report, though Nissan expressed concern about the potential impact of a no-deal Brexit on its business.

“We urge UK and EU negotiators to work collaboratively towards an orderly, balanced Brexit that will continue to encourage mutually beneficial trade,” Nissan said.

British prime minister Boris Johnson said on Sunday that he did not particularly want the Brexit transition period, which runs until the end of the year, to run out without a

trade deal in place, but that Britain could live with such an outcome.

The Nikkei report, however, underscores how a failure to agree a new trading relationship could prompt foreign companies operating in Britain to reconsider the viability of operations in the face of extra tariffs that erode profitability, and customs checks and regulations that slowed operations.

Toyota operates a plant in Derbyshire, in central England, and produced roughly 8 per cent of the 1.52 million cars made in Britain in 2018. It also produces engines at a factory in Wales.

Nissan has a manufacturing plant in Sunderland in the northeast which employs 7,000. That factory would be “unsustainable” if Britain leaves the EU without a trade deal, Nissan said in June.

Nissan said in March that it was pushing ahead with plans to build its new Qashqai sports utility vehicle in Sunderland. When it first announced the £52-million (€57 million) investment in 2016, the carmaker said it had won reassurances from the British government that Brexit would not affect its competitiveness. – Reuters