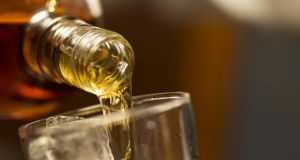 Bushmills recently announced a £50m expansion to double production at its site in Co Antrim over the next five years, while the Rademon Estate has completed a £2.5m investment. Photograph: iStock

Northern Ireland distillers helped grow exports of Irish whiskey to non-EU countries to more than £25.6 million last year, according to the latest figures from the UK’s department for trade.

The UK body said distilleries in the North from the long established Bushmills to newcomers like Rademon Estate and Echlinville Distillery are helping to spark a “renaissance of Irish whiskey” around the world.

The department for international trade said the latest figures show South Africa is the fastest growing non-EU market for Irish whiskey, with whiskey exports valued at £17.6 million in 2018. Demand is also strong in Australia, Kenya, Mexico, Norway, Taiwan and the US.

According to the UK’s international trade secretary Dr Liam Fox distilleries like Bushmills make a vital contribution to the North’s “economic prosperity”.

Bushmills recently announced a £50 million expansion to double production at its site in Co Antrim over the next five years, while the Rademon Estate has completed a £2.5 million investment project.

And according to the UK trade department it is not just growing export figures that have boosted distilleries in the North – they are also becoming tourist attractions in their own right.

It is estimated that together the Old Bushmills, Echlinville, Rademon Estate and Fermanagh-based Boatyard distilleries attract more than 120,000 visitors each year.

1 Sacrificing pubs for schools: Ireland’s latest Covid trade-off
2 Green power auction wins for 19 wind farms and 63 solar projects
3 Bank of Ireland takes €937m loans charge amid Covid-19
4 Quintain to seek permission for 1,000 homes at Cherrywood
5 Marlet begins delivery of 216 apartments in Dublin’s south docklands
6 Former City Arts Centre’s €50m-plus sale hits obstacle
7 How safe is it to go back to the office?
8 Anthony Levandowski gets 18 months in prison for stealing Google files
9 Motor insurer windfalls, Cherrywood homes and a call to prioritise 5G
10 Elderly parents living in property you own will save you on capital gains tax
Real news has value SUBSCRIBE