Vaping pushes cigarette companies towards merger a decade after they split 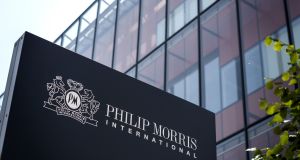 Philip Morris International is in merger talks with Altria in a deal that would combine the international and US makers of Marlboro, creating a tobacco giant with a market value of more than $210 billion. Photograph: Fabrice Coffrini / AFP / Getty Images

Philip Morris International is in merger talks with Altria in a deal that would combine the international and US makers of Marlboro, creating a tobacco giant with a market value of more than $210 billion.

In a statement, Philip Morris International said it was considering an all-stock merger of equals. “There can be no assurance that any agreement or transaction will result from these discussions”.

A deal would recombine companies that split in 2008 when Altria’s exposure to the US market and increasing threat of litigation and regulation became a liability for its international business.

The talks come just over two years since rival British American Tobacco agreed to buy Reynolds American in a $49.4 billion deal. At the time, analysts expected PMI to recombine with Altria which retains the Philip Morris USA business, given that fears over US litigation of cigarette groups had dissipated.

The two companies are investing in e-cigarettes despite intense opposition from regulators in Washington, which have warned that teenage vaping has become an “epidemic”. According to one federally funded study last year, one in five high school seniors said they had vaped nicotine in the previous month.

“Altria [is] more attractive with [its] stake in Juul and Philip Morris could be the ideal international partner for Juul, given Juul’s clear dominance of the US ecigarette [and] vapour market and international ambitions,” said Bonnie Herzog, an analyst at Wells Fargo.

Both companies were long shunned by socially conscious investors, but have become unlikely champions of sustainability in recent years, arguing that their investments can help smokers switch to less harmful products and that their long-term goal is to end the market for cigarettes altogether. – Copyright The Financial Times Limited 2019