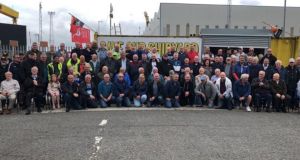 Harland and Wolff workers outside the gates of the shipyard.

A number of “non-binding” offers are on the table for Harland and Wolff which, if successful, could ensure a new future for the historic east Belfast shipyard which is in the hands of administrators.

According to Michael Jennings and Brian Murphy of BDO NI, who were appointed as joint administrators of the yard at the beginning of this month, there has been a “healthy level of interest” from potential buyers.

Mr Jennings and Mr Murphy have said their priority is to “find a viable, commercial solution” for Harland and Wolff and have been working in close contact with trade unions in Northern Ireland who want to see the shipyard sold as a “going concern” to protect the 130 jobs currently at stake.

Because of the level of interest in Harland and Wolff the administrators plan to extend an “unpaid temporary lay-off” arrangement it has with unions and former employees to the end of September.

They believe that this extends the window of opportunity to try and successfully secure a complete sale of the business.

In a statement on Friday the joint administrators said they are continuing to “work with all interested parties and bidders as they undertake further financial and legal due diligence work in the coming weeks as every effort is made to secure a going concern sale.”

Meanwhile trade unions, who are still calling for the stricken yard to be renationalised by the UK Government, will hold a major rally outside the gates of Harland and Wolff on Friday.

Unite’s regional secretary, Jackie Pollock, said although it believes the “quality and seriousness of the commercial bids” for Harland and Wolff signals a “significant degree of confidence for the future” the union believes the UK Government has an obligation to intervene in the shipyard crisis.

Meanwhile Belfast city council will also hold a manufacturing forum on Friday which will be attended by both union officials and the Secretary of State for Northern Ireland, Julian Smith.