Investment comes despite a crackdown on ‘epidemic’ levels of underage vaping 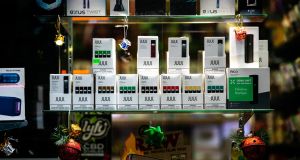 Cigarette maker Altria on Thursday confirmed a 35 per cent stake in Juul Labs that values the electronic cigarette group at about $38 billion (€33.15 billion).

Altria will invest $12.8 billion in Juul, helping to make it one of the world’s most valuable private companies.

The deal comes at a time when health concerns and shifting consumer preferences have seen cigarette consumption decline in developed markets.

“We have long said that providing adult smokers with superior, satisfying products with the potential to reduce harm is the best way to achieve tobacco harm reduction,” said Howard Willard, Altria’s chief executive. “Through Juul, we are making the biggest investment in our history toward that goal.”

The investment comes despite a crackdown on flavoured e-cigarettes. The Food and Drug Administration’s head Scott Gottlieb has said he is preparing to crack down on what he has called “epidemic” levels of underage vaping, and Juul has already pulled sweet flavours from more than 90,000 retailers.

As part of the deal Altria will give Juul shelf space alongside its combustible cigarettes, though flavoured products will only be available on Juul.com. It will also provide Juul with its logistics and distribution experience, including the option to be supported by its 230,000 retail locations.

Altria financed the deal through a $14.6 billion term loan facility arranged by JPMorgan. The remaining $1.8 billion may be used to finance investment in Cronos Group.

Altria will be subject to a standstill agreement, which prevents the company from growing its stake beyond 35 per cent and prevents it from selling Juul shares for six years from closing.

Altria on Thursday also disclosed a cost-reduction programme aimed at delivering annualised savings of about $500 million-$600 million by the end of 2019. The company said it expected pre-tax restructuring charges stemming from the programme to be $230 million-$280 million or about nine to 11 US cents a share, which will be recorded in its fiscal fourth quarter. – Copyright The Financial Times Limited 2018