Ireland’s former US ambassador Anne Anderson to join Smurfit board 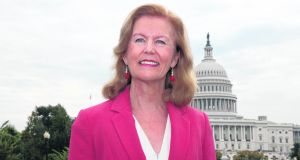 Anne Anderson, former Irish ambassador to the US.

Smurfit Kappa has appointed former Irish ambassador to the United States, Anne Anderson, as an independent, non-executive director to its board with effect from next month.

The Tipperary native held the position of Ireland’s ambassador to France between 2005 and 2009, followed up by a stint as permanent representative to the UN in New York. She held the role as ambassador to the US between 2013 and last year.

Ms Anderson is a member of the advisory board for the Peacekeeping Fund at the UN.

“Anne’s significant international experience will be of great value and her background further enhances the diversity of expertise on our board,” Smurfit Kappa chairman Liam O’Mahony said in a statement on Thursday.