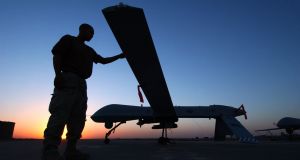 The value of Irish exports of military equipment rose by 29 per cent last year to €37.3 million, with almost two-thirds of all military components, software and technology being sold to the US.

New figures published by the Department of Business, Enterprise and Innovation show more than €24 million worth of military equipment was exported to the US in 2018.

It included military equipment used in aircraft and unmanned aerial vehicles specially designed or modified for military use worth more than €10.2 million as well as €13 million worth of fire control and related alerting and warning equipment.

The growth in sales of military exports came last year despite a decrease in the number of companies holding individual military licences from 118 in 2017 to 96. However, the overall value was still less than half the record set in 2014 of €86.2 million.

Licences for military goods exported from the Republic in 2018 consisted mostly of components listed on the EU Common Military List, sports and hunting firearms and controlled items to companies engaged in mining activities.

Separately, the value of Irish exports of “dual-use” equipment that can be used for both military and civilian applications increased by 11 per cent last year to almost €3.57 billion.

It included exports of goods on individual licences, which increased by 15 per cent to €410.8 million, with particularly strong growth in the exports of telecommunications and information security equipment, which accounted for almost two-thirds of the total.

Exports under global dual-use licences, which are issued to companies that have a very high volume of low-risk exports, totalled almost €3.16 billion, which were also predominantly equipment used in telecommunications and information security.

Global dual-use licences are issued subject to a number of strict conditions, including a prohibition on their use for exports to military, police or state security forces end-users.

The department does not provide information on the identity of firms exporting military and dual-use equipment on grounds of commercial sensitivity, confidentiality of certain information and the security of workers and facilities.

The department said the licensing process centred on ensuring as far as possible that items exported will be used by the end-user for the stated purpose and not for any illicit use.

“The safeguards built into the licensing system facilitate robust checks and cross-checks in this regard,” the department said.

It confirmed that 15 applications for a dual-use export licence were refused last year following consultation with the Department of Foreign Affairs and other EU and international authorities.

“These denials were made on the grounds of considerations about the intended end-use, the risk of diversion and EU sanctions,” the department said.

The Minister for Business, Enterprise and Innovation, Heather Humphreys, revealed earlier this year that her department had refused 16 licence applications for dual-use exports to Saudi Arabia since January 2018, 11 of which were refused on the basis of concern over human rights in Saudi Arabia and its respect for international humanitarian law.

Ms Humphreys confirmed that no applications to export military equipment to Saudi Arabia have been received since August 2013.