GE, which dismissed the claims, saw its shares fall as much as 15% after publication of a 170-page report by Harry Markopolos 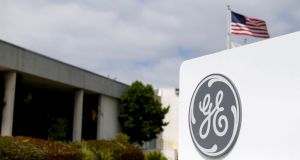 An accounting fraud “bigger than Enron and WorldCom combined” is hidden inside General Electric, according to the financial investigator who sounded the first alarms over Bernard Madoff’s Ponzi scheme.

GE, which dismissed the claims as meritless, saw its shares fall as much as 15 per cent after publication of a 170-page report by Harry Markopolos. He alleged that the industrial conglomerate’s accounts concealed a $38 billion (€34 billion) fraud in its insurance and oilfield services businesses. “I think that they’re a bankruptcy waiting to happen,” Mr Markopolos told CNBC.

Mr Markopolos is known for his - largely unheeded - warnings on the Madoff Ponzi scheme in the years before it imploded in 2008.

He and his team provided an advance copy of their report on GE to a hedge fund and said they would share profits from any market moves their allegations set off.

Larry Culp, GE’s chief executive, called that arrangement “market manipulation - pure and simple”. In a statement, he said: “The fact that he wrote a 170-page paper but never talked to company officials goes to show that he is not interested in accurate financial analysis but solely in generating downward volatility in GE stock so that he and his undisclosed hedge fund partner can personally profit.”

The company said Mr Markopolos’s claims were “meritless” and “unsubstantiated”, adding: “We operate to the highest level of integrity in our financial reporting and we have clearly laid out our financial obligations in great detail.”

By referring to Enron and WorldCom, Mr Markopolos invoked two of the most notorious accounting frauds of the early 21st century. Both scandals resulted in criminal penalties against top executives.

Mr Markopolos is also seeking compensation from the US government, having submitted his report to whistleblower programmes of the Securities and Exchange Commission and the US Department of Justice, which share any financial penalties that arise from investigations launched because of tip-offs.

GE, once America’s most valuable company, has been in turmoil over the past three years. Shares have tumbled as the company replaced two chief executives and dealt with the costs of misjudged acquisitions and risky financial services operations.

The Markopolos report argued that GE has understated its liabilities in its insurance business, said its cash situation is worse than disclosed in its filings and claimed that it has not properly accounted for its acquisition of a stake in oilfield services provider Baker Hughes, which was completed in 2017. GE began to sell down that stake in 2018.

The report, which Mr Markopolos said was the subject of seven months of research, focused on GE’s long-term care reinsurance business, which covers costs such as nursing homes. Mounting liabilities will require $28 billion in new reserves, including $18.5 billion in cash immediately, the research said. This was despite the recent addition of $15bn to its reserves to cover insurance liabilities.

The report claimed GE hid the potential costs of long-term care insurance for years, dating to the 1980s and 1990s, when the company was led by famed chief Jack Welch. The company accounted for insurance premiums as earnings while policyholders were young without building reserves to offset mounting liabilities when they grew old and frail, Mr Markopolos said.

GE said: “We believe that our current reserves are well-supported for our portfolio characteristics, and we undertake rigorous reserve adequacy testing every year.”

Mr Markopolos also took aim at accounting for Baker Hughes. GE merged its oil and gas business with Baker Hughes in 2017 but has since reduced its majority stake from 62.5 per cent to 50.4 per cent as it continues to raise cash through divestitures.

He said maintaining a 50.4 per cent interest was a “sham transaction” that preserved its status as a non-controlling interest rather than a corporate investment, hiding $9.1 billion in losses in the process.

GE responded that its US accounting principles required it to report consolidated earnings, “contrary to what Mr Markopolos alleges”. The company’s latest quarterly financial statement said it would take a loss of about $7.4 billion once it becomes a minority shareholder, based on the Baker Hughes’ share price in late July.

Should my mam wait for house prices to drop before buying? 20:07
US ‘hard seltzer’ drink White Claw launches in Ireland 18:09
Citigroup warns that markets are out of step with reality 14:48
Donohoe told insurers they risked ‘irreparable damage’ to reputation 13:24
Chris Johns: Past is another country when it comes to our post-pandemic future 12:11
Search executive
jobs on irishtimes.com