Kingspan growth strategy set to continue to hinge on acquisitions

Margins under pressure due to rising cost of raw materials 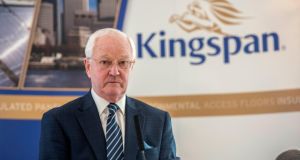 The odds are that Kingspan will follow up recent deals in north and south America with further acquisitions in coming months.

Investec analyst, Paul Cahill, points out that over the last three to four years, Kingspan has spent an annual average of €250 million on buying rivals. On the basis that the total this year to date is €54 million, there’s a fair chance that there are more to come.

The bigger of the two purchases that Kingspan made this year – €40 million for US company CPI Daylight, which makes glass canopies, skylights and roofs – will be added to its “light and air” division.

This was born last year when Kingspan bought German skylight maker Essman. It will make skylights, ventilation and related products that tie in with its main insulated panels and boards.

Murtagh told analysts on Friday that the division could grow to have a turnover of €500 million in five years. Sales in first six months of this year, before CPI’s purchase, were €81.7 million. Cahill believes that most of the growth is likely to come from acquisitions.

Margins have been under pressure thanks to rising raw material costs for steel and the chemical methylene diphenyl diisocyanate (MDI), which it uses to make these boards. Kingspan has been passing the extra costs on to customers, but there is a three-month time lag in recovering the cost.

Murtagh says he does not see prices coming down soon, but Cahill points out that they will at some point. When that happens, the situation “flips” for Kingspan and it could go through a period of sharp margin growth.

Kingspan was caught in the debate over the Grenfell Tower tragedy earlier this summer when it emerged that some of its products had been used in the building. Murtagh points out that only 5 per cent of the cladding included Kingspan boards, sold by a distributor, not the group.

He also says the company would never have recommended using them in combination with the other material used in the tower’s cladding.