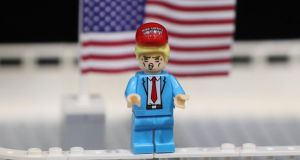 Lego abruptly removed its chief executive Bali Padda after just eight months on Thursday, replacing the 61-year-old Briton with a younger Danish industrialist in a battle to become the world’s biggest toymaker.

The Danish company said it had appointed Niels Christiansen (51) who joins Lego after nine years as chief executive of Danfoss where, by focusing on digitalisation, he increased sales and turned the firm into a global leader in energy efficiency.

Lego is hoping Mr Christiansen can revive its flagging growth by increasing sales in Asia and by fully embracing the digital era.

After flirting with bankruptcy after 2000, Lego saw a decade of impressive growth under the leadership of Jorgen Vig Knudstorp, who is now chairman of the family-owned maker of the distinctive plastic building bricks which have been enjoyed by generations of children.

When the toy market shrank after the financial crisis, Lego bucked the trend by tying up with movie franchises such as Star Wars, Harry Potter and Indiana Jones in deals spanning Lego sets, video games, movie franchises and smartphone applications.

But while Lego now vies with Barbie doll maker Mattel to be the world’s largest maker of toys, revenue growth slowed from 25 per cent in 2015 to just 6 per cent last year with sales of 37.9 billion Danish crowns (€5.4 billion).

Enter Mr Padda, a Lego veteran and the first non-Dane to lead the firm, who took over from Mr Knudstorp, a Danish national who had overseen average annual sales increases of more than 15 per cent and made Lego the world’s most profitable toymaker.

Before Danfoss, Mr Padda’s replacement Mr Christiansen was head of hearing aid firm GN Store Nord. He has also been on the board of AP Moller-Maersk, Danske Bank and Bang & Olufsen.

“Niels managed to transform a traditional industrial company into a technology leader,” Mr Knudstorp said, adding that his experience in digitalisation and localisation will help improve products and efficiency at Lego.

Mr Padda will now take on a special advisory role within the Lego Brand Group, which is headed by Mr Knudstorp.

Mr Knudstorp says he started looking for a younger successor to Mr Padda, who is the oldest person on the Lego management team, immediately after his appointment, but admitted that the transition had come faster than expected.

“It can take a long time to find the right one, but when Niels stepped down at Danfoss, I faced one of the country’s absolute best persons to lead a big global company. I suddenly saw a chance to shorten the process,” Mr Knudstorp said.

“It could easily have taken two to three years,” he said, adding that while it was not essential to have a Dane leading Lego, it was important to understand its roots.

“[Christiansen] has a solid rooting in Danish values, where you have authority because you’re a competent, credible and authentic leader, not because you’re the boss who sits at the end of the table and smokes big cigars,” Mr Knudstorp said.

And as far as the chairman is concerned, Lego’s new boss already has the building blocks he needs to revive growth.

“We still have a very strong brand even though growth rates declined last year,” Mr Knudstorp said. “At Lego, we make significantly more money than our closest competitors combined.” – (Reuters)