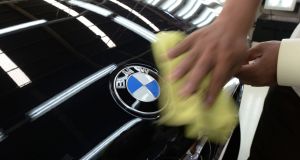 An employee polishes the hood of a BMW 530i sedan on the production line. Photographer: Dimas Ardian / Bloomberg

BMW, the German carmaker, posted stronger than expected profits after sales of its latest models in Europe and Asia helped offset a decline in the United States.

The Munich-based maker of luxury cars said operating margins at its automobiles unit rose to 9.7 per cent in the second quarter, from 9.5 per cent last year, near the upper end of its 8 to 10 per cent target.

The figure compares with 9.2 per cent at Daimler’s Mercedes unit and 9.1 per cent at Audi, the luxury unit of Volkswagen.

The improved margins helped BMW post a 9.2 per cent climb in profit before tax to €3.06 billion in the quarter as revenues climbed 3.1 per cent to €25.8 billion.

BMW shares climbed 0.7 per cent on Thursday as the group said automotive revenues were expected to see a “solid” increase this year, compared with the “slight” increase predicted before.

Despite selling 1.22 million cars across its BMW, Mini and Rolls-Royce brands in the first half of the year – up 5 per cent on its record-setting result a year ago – shares in BMW have fallen more than 10 per cent this year as investors remain wary about the whole sector.

There are concerns that the current cycle of car-buying is at peak levels. Moreover, investors are pessimistic that carmakers can maintain the current level of profit as the industry is disrupted by the shift to shared, self-driving, battery-powered cars.

Mike Tyndall, analyst at Citi who has a “sell” rating on BMW, said the 9.7 per cent margins were, ironically, “one of our main concerns” because “there is limited scope for margin expansion”.

Max Warburton, analyst at Bernstein, said BMW is so “handsomely profitable” that, in the second quarter alone, its earnings per share were higher than what it used to achieve in a full year back in 2001 to 2005. But, he said, “while the stock is very cheap, we struggle to see how the stock can make progress this year”.

In addition to cyclical worries, German carmakers are fighting accusations that they colluded on technology for decades, including exhaust treatment systems. Germany’s environmental and transport ministers have demanded carmakers reduce emissions on older diesel cars.

Harald Krüger, chief executive, has denied allegations of collusion, and on a conference call reiterated that BMW was not aware of any investigation into its activities.

Despite a lower share of diesel car sales in Europe, Mr Krüger said BMW can still meet 2020 emissions targets on carbon dioxide owing to a growing proportion of electrified cars.

“We are the market leader in premium segment plug-in cars,” he said.

This year the group expects to sell more than 100,000 electrified cars, including its pure-electric i3 city car.

Germany’s carmakers agreed this week to offer software upgrades on 5.3 million vehicles to cut harmful emissions. BMW said owners of older Euro 4 standard BMW cars will be given an “environmental bonus” of up to €2,000 if they trade their vehicle for a new model that meets the current Euro 6 standards.

Critics want the carmakers to do more, by offering hardware upgrades to older cars as well, but companies are strongly against this move, which could cost of billions of euro.

“The likelihood of a hardware upgrade is very low,” Mr Krüger said on the call. “In many cases it’s not even possible because there isn’t room in the car.” – Copyright The Financial Times Limited 2017