Irish born Michael Lynch charged with fraud by the US 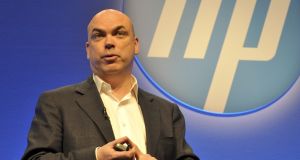 Michael Lynch, an Irish-born entrepreneur and former chief executive officer of Autonomy, was criminally charged with fraud by the US tied to the British software maker’s 2011 acquisition by Hewlett-Packard.

Prosecutors had long identified Mr Lynch (53) as a co-conspirator with his chief financial officer at Autonomy, Sushovan Hussain, who was found guilty in April of orchestrating an accounting fraud to arrive at the $10.3 billion price Hewlett-Packard paid for the company.

Autonomy was the UK’s second-largest software business at the time. Hewlett-Packard later wrote down its value by $8.8 billion, citing fraud by Autonomy and asking the US justice department to investigate.

Mr Lynch used false and misleading statements from 2009, 2010 and early 2011 “to make Autonomy more attractive to a potential purchaser like HP”, according to the indictment, which says Mr Lynch made $815 million when HP acquired his Autonomy shares.

Mr Lynch’s lawyers called the indictment a travesty, saying it shouldn’t have been brought in the US as it “targets a British citizen with rehashed allegations about a British company regarding events that occurred in Britain a decade ago”.

They said the US is making Mr Lynch a “scapegoat” for HP’s “long history of failed acquisitions”.

“There was no conspiracy at Autonomy and no fraud against HP for the DoJ to take up,” attorneys Chris Morvillo and Reid Weingarten said in an emailed statement.

Hewlett Packard Enterprise praised the indictment. HPE was formed in the breakup of Hewlett-Packard’s corporate computing divisions from its printer and PC business in 2015.

“HPE believes that the facts uncovered during the course of this matter will further demonstrate the harm that was caused by Dr Lynch, Mr Chamberlain, Mr Hussain and others to HP,” spokesman Emmanuel Fyle said in an email.

The charges were filed as lawyers representing Invoke Capital, a London-based venture capital firm founded by Mr Lynch, are resisting a court order requiring Hussain to disclose details about his financial dealings with Lynch that prosecutors said raise concerns about “potential hush money”.

Hussain, whose sentencing date was postponed, was required to disclose his stake, with Mr Lynch, in Invoke and start-up company Darktrace. US district judge Charles Breyer ordered Hussain to turn over to prosecutors detailed records of the investments, including transactions involving Mr Lynch, by November 22nd.

The government argues that Mr Lynch’s reassembling of his Autonomy inner circle at the new firm, including Hussain, isn’t illegal by itself but may have created financial relationships that prevented some of those people from coming forward as witnesses.

“Where the same circle of participants who defrauded Autonomy’s investors, HP, and HP’s investors are all reliant on the wealthiest of the co-conspirators, the government has legitimate concerns about hush money,” prosecutors said in a court filing.