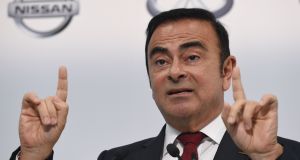 Carlos Ghosn has denied to Tokyo prosecutors that he intentionally understated his pay in financial documents, in the first reported comments by the Nissan ex-chairman since he was arrested last week, according to Japanese media.

Japanese public broadcaster NHK reported on Sunday that Mr Ghosn, the 64-year-old former boss who also headed the Renault-Nissan-Mitsubishi alliance, had denied allegations against him during questioning by prosecutors, citing unidentified sources.

Greg Kelly, a Nissan board director and a close aide who was arrested with Mr Ghosn last Monday, was also quoted in the Japanese media at the weekend as denying the allegations, saying he “acted appropriately” and consulted Nissan and other relevant parties such as external law firms and the Financial Services Agency regarding Mr Ghosn’s remuneration.

The downfall of one of the most celebrated bosses in the car industry came as Mr Ghosn was considering the merger of Renault and Nissan to cement an alliance that had in recent months faced strains.

Mr Ghosn and Mr Kelly are still in custody at a detention centre in Tokyo after prosecutors accused them of understating Mr Ghosn’s salary by $44 million over five years in financial statements.

An internal investigation by the Japanese carmaker, sparked by a whistleblower, had also found that Mr Ghosn had made personal use of company funds.

Born in Brazil to a family of Lebanese immigrants, Mr Ghosn faces allegations that he used a subsidiary in the Netherlands to buy personal residences in Beirut and Rio de Janeiro.

There are also questions over a $100,000-a-year (€88,200) consulting contract signed between Mr Ghosn’s older sister and Nissan, although there was no evidence of any actual work being done, according to a person with knowledge of the findings of a Nissan internal investigation handed to Japanese prosecutors.

Nissan declined to comment on Mr Ghosn’s denial but added it was co-operating fully with the investigation.

Following a board meeting on Thursday, Nissan said Mr Kelly had “been determined to be the mastermind of this matter, together with Carlos Ghosn”. The board voted unanimously to dismiss Mr Ghosn and Mr Kelly as chairman and representative director.

Mr Ghosn and Mr Kelly could not be reached for comment. Neither has been formally charged with any crime.

Mr Ghosn has hired a former public prosecutor, Motonari Otsuru, as his lawyer, according to a person familiar with the appointment. Mr Otsuru was not immediately available to comment.

The Tokyo district public prosecutors office could not be reached for comment on Sunday. On Friday, Shin Kukimoto, deputy chief prosecutor, said he could not disclose what Mr Ghosn and Mr Kelly were telling prosecutors in response to the allegations.

Former prosecutors and legal experts say it is common practice for Japanese prosecutors to leak information to local media in high-profile cases where they seek to form public opinion ahead of formal charges. Prosecutors have denied disclosing investigation details to the media.

Tatsuo Uemura, professor in securities regulation and corporation law at Waseda University, said the stakes were particularly high in the current case since it was likely to be only the second time that Tokyo prosecutors would use Japan’s new plea-bargaining system, which began in June.

A Nissan employee in the legal department is believed to have struck a plea bargain with Tokyo prosecutors, according to people close to the company. Nissan declined to comment.

“Compensation will be not be the only thing they will be going after,” said Prof Uemura, adding that the plea bargain would probably allow prosecutors to pursue more difficult aspects of the case including the alleged misuse of company funds. – Copyright The Financial Times Limited 2018