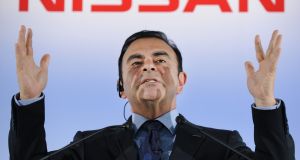 Nissan’s board has voted to oust chairman Carlos Ghosn, sacking the man who led the company for nearly two decades, following his arrest over allegations of corruption. Photograph: Toru Yamanaka / AFP / Getty Images

Nissan’s board has voted to oust chairman Carlos Ghosn, sacking the man who led the company for nearly two decades and transformed it into one of the world’s largest automotive groups through an alliance with France’s Renault.

Mr Ghosn and another board director, Greg Kelly, are still being held in custody at a detention centre in Tokyo after being arrested on allegations of falsifying Mr Ghosn’s pay in financial statements. Nissan’s board also decided to dismiss Mr Kelly, according to one person familiar with the matter.

Mr Ghosn stepped off his private jet in Tokyo on Monday evening as a globetrotting boss with one of the business world’s most storied resumes. Tonight he again sleeps in a Spartan Japanese detention centre, where he is under interrogation for under-reporting his income and misusing assets at Nissan, the car-maker many believe he helped save.

Mr Ghosn’s vertiginous fall has caught the industry flatfooted and revealed cracks in the multinational alliance he led. As chairman and chief executive of Renault, Nissan’s French partner, and head of Nissan and Mitsubishi, he ran the world’s most successful auto company. Last year the three firms sold 10.6 million cars, just ahead of Volkswagen, Toyota and General Motors.

Renault has so far declined to sack the French national, in contrast to its Japanese partners, who have wasted little time trying to remove him. Nissan’s ending of his 20-year reign followed a very public thrashing by the company’s chief executive Hiroto Saikawa, who told a press conference on Monday that Mr Ghosn had become too powerful.

News that Mr Ghosn was planning to merge Renault and Nissan before his arrest has fuelled speculation that he is the victim of a corporate coup d’etat. Nissan insiders have told the Japanese media that they resented the company’s second-tier status in the alliance: Renault owns 43 per cent of Nissan, which in turn owns 15 per cent of the French company.

Prosecutors have kept up a steady drip-feed of stories to the media of Mr Ghosn’s alleged wrongdoing, which includes using company resources to take his family on holidays and buy two luxury homes in a British Virgin Islands tax haven. Nissan also paid to buy and renovate Mr Ghosn’s homes in Rio de Janeiro, Beirut, Paris and Amsterdam, according to broadcaster NHK.

During a period of five years from 2011, he reportedly filed false statements in annual securities’ reports, under-reporting his pay by about five billion yen. Tellingly, the country’s largest business newspaper, the Nikkei, already dubs him the “disgraced” former chairman, though he has yet to go on trial.

Takeshi Miyao, a car industry consultant says there appears to be little doubt that Mr Ghosn committed serious offences. “Japanese prosecutors don’t arrest people unless they’re sure they can win,” he says.

Some Japanese commentators allege that Mr Ghosn became greedy and have dubbed him a “money-grabber”. Mr Ghosn’s ex-wife, Rita, proved a poor character witness this week when she posted a message to social media apparently referring to him. “All narcissists are hypocrites,” the post said. “They have a whole set of rules for others, but follow none of their own rules, and practice nothing of what they preach.”

Mr Ghosn’s arrest underscores a key principle of corporate governance in Japan, said Jesper Koll of WisdomTree, a fund manager in Tokyo. “Greed and manipulation for personal gain will not be tolerated.”

Mr Kroll says Japan’s most powerful business lobby, Keidanren, is leading a campaign against the “excessive greed and plutocracy now plaguing many western-style CEOs and executive teams. Japan prides herself on having a better system”.

Mr Ghosn’s compensation first came under real scrutiny in 2009, when a new disclosure system for the salaries of corporate executives revealed he had received 891 million yen from Nissan, making him Japan’s best-paid boss.

Yet, some have expressed disbelief that Mr Ghosn and Mr Kelly, could have masterminded fraud on such a scale for five years under the noses of the company.

“The idea that Nissan didn’t actually know how much it was paying its own CEO should send shareholders running for the hills,” said one legal expert.

Nobuo Gohara, an ex-prosecutor who runs a law firm, said it was unheard of for such punishment to be doled out to a director for making false statements in a securities’ report. It seems unlikely that Nissan’s crackdown on executive misconduct is unrelated to the battle for control raging inside the company.

At the every least, Nissan appears to have been poorly governed. Nobody, from the company’s outside directors to its auditors, seems to have spotted alleged cheating by Mr Ghosn. Once the most famous foreign businessman in Japan, he now languishes out of sight in detention, where, under Japanese criminal law, he can be held for up to three weeks without trial.

7 Developer challenges refusal of permission for 64 homes in Kildare