Nissan to seek a review of share alliance with Renault 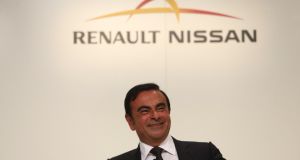 Nissan’s board voted unanimously to oust Ghosn, who was arrested over allegations of financial misconduct.

Nissan intends to seek a review of the shareholding structure of its alliance with Renault SA to create a more equitable partnership between the two carmakers, according to a person familiar with the plans.

The review will cover the issue of voting rights, the person said, asking not to be identified as the information isn’t public.

Renault owns 43 per cent of Nissan and has the right to vote on decisions by the board while the Japanese carmaker holds 15 per cent of the French company but doesn’t have voting rights. That imbalance has existed since the alliance was formed in 1999.

According to Japanese corporate law, Renault’s voting rights could be cancelled if Nissan raises its shareholding to more than 25 per cent in the French carmaker.

Under French rules, if Renault lowered its stake in Nissan below 40 per cent, then it will help the Japanese carmaker get voting rights in the French company.

French President Emmanuel Macron had no idea that Nissan was preparing to overthrow Carlos Ghosn. As Ghosn’s arrest Monday in Tokyo raised questions about Nissan’s alliance with French auto giant, the head of state followed the crisis through the headlines, just like his finance minister and the officials in charge of the state’s stake in Renault, two official with knowledge of the matter said.

They had no warning that trouble was brewing for 64-year-old Ghosn, a French-Lebanese high-flyer, and more importantly, how that threatened to destabilise the pact between Nissan and Renault, the officials said.

“This is the kind of information that those doing economic intelligence want to know about,” Alain Juillet, a former division chief in the French secret service, said in an interview. “The French intelligence didn’t know how things were moving inside Nissan.”

While the government was in the dark, concerns were nevertheless growing elsewhere in Paris. One person familiar with the Renault management team said they knew Nissan had long been angered by Ghosn’s abuse of company resources -- using the company jet on personal trips and handing his sister a bogus job. That behavior had been tolerated for years because he was considered so important to the company.

Separately, Nissan aims to nominate a new chairman within a month or two, hopefully before its next board meeting slated for around December 20th, a source familiar with the matter said, after the automaker ousted Carlos Ghosn as chairman on Thursday.

The nomination will be done by the Japanese automaker’s newly created advisory committee that includes the company’s three independent directors.

Another special committee led by the independent directors to discuss improving governance based on third-party advice will then likely propose setting up a nomination committee to select a permanent chairman, said the source, who declined to be identified because of the sensitivity of the matter.

“It’s a two stage process,” the source said. “First we have to decide on a temporary chairman as soon as possible.”

Nissan’s board voted unanimously to oust Ghosn, who was arrested on Monday over allegations of financial misconduct including under-reporting of his remuneration and personal use of company assets. – Reuters