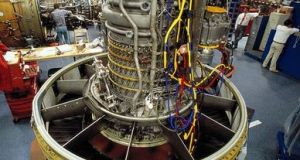 A GE jet engine assembly plant.The company said it expected to hit its cash target of $12bn to $14bn for the full year. Photograph: Getty Images

General Electric reported on Friday that first-quarter cash flow from its industrial operations turned negative and was less than the company expected, though its earnings and revenue exceeded analyst estimates.

The maker of jet engines, power plants and other industrial equipment reported a negative $1.6 billion in cash flow from industrial operating activities compared with a negative $600 million it expected for the quarter due to higher working capital and the timing of bills to customers.

Investors have been watching cash flow as an indicator of GE’s operating performance, and GE said it still expects to hit its cash target of $12 billion to $14 billion for the full year.

Chief executive Jeff Immelt noted a 10 per cent rise in quarterly orders and said the world economy was “an attractive environment for GE”.

“We see global growth accelerating, while the US continues to improve,” Mr Immelt said on a conference call, adding that growth in China, southeast Asia, Latin America and Africa this year were all “stronger than last year”.

GE beat analysts estimates for adjusted earnings and revenue, even though revenue fell 1 per cent to $27.66 billion, due to lower sales in its oil-and-gas and lighting businesses. Analysts expected $26.26 billion, on average.

Adjusted earnings of 21 US cents a share were unchanged from a year ago and beat analyst estimates of 17 cents.

“This is clearly a notch higher performance,” said Nicholas Heymann, an analyst at William Blair. “They had to hit a bunch of metrics and they hit most of them.”

Pandemic brings a halt to Zara-owner’s Irish expansion 16:33
‘I don’t need to do any of this. . .I don’t actually need to work.’ 16:07
Second large Aryzta shareholder voices opposition to proposed takeover 15:45
Deutsche Bank’s head of accounting under investigation over Wirecard 15:29
Farm safety equipment to benefit from improved capital allowances 14:14
Search executive
jobs on irishtimes.com