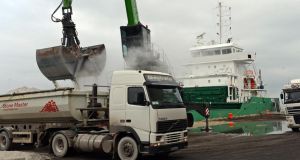 A ship is unloaded at Ecocem’s plant in the Dublin docks. Ecocem’s US subsidiary, Orcem Americas, was refused permission to build a grinding mill on the waterfront at Vallejo in California. Photograph: Eric Luke

Irish cement manufacturer Ecocem is appealing a US authority’s decision to refuse it planning permission to build a €45 million grinding mill in San Francisco Bay.

The planning commission in Vallejo, California, recently refused Ecocem’s US subsidiary, Orcem Americas, permission to build the mill on the city’s waterfront on environmental grounds.

Orcem has lodged an appeal with Vallejo city council challenging the refusal on a number of grounds and arguing that the commission relied on “subjective and arbitrary judgments” in reaching its conclusion.

“Those judgments were made as a result of unfair hearing process orchestrated by a biased staff,” Orcem’s appeal states.

Shortly before the decision, Vallejo city hall officials recommended that the planning commission refuse permission on a series of grounds, including increased traffic and pollution.

Vallejo Marine Terminal (VMT), which intends building a deepwater berth to service the mill, is also appealing. It was refused permission at the same time as Orcem.

The Ecocem subsidiary also wants the council to correct technical and factual errors in a final environmental impact report on the project.

Orcem is also seeking that Vallejo city council overturn a decision by the local architectural heritage and landmarks commission designating six buildings on the proposed site as historic.

Local campaigner Peter Brooks, of Fresh Air Vallejo, one of the organisations opposed to Orcem’s plan, described the appeal as being without merit.

Orcem wants to build the factory on the site of an old flour mill on Vallejo’s waterfront. It would grind furnace slag from iron smelting, which can then be used as a component in cement.

It would import the slag from the far east, hence the need for the berth proposed by VMT, which would allow ships to unload the raw material at the proposed mill’s site.

Orcem applied originally in 2015 but met opposition from local groups whose members feared its impact on the environment. Those concerns included the likelihood that the mill would emit dust and other material and lead to a huge increase in truck journeys through parts of the city.

Ecocem and its subsidiary have always maintained that they adhered to and exceeded environmental law requirements.

The Irish group has businesses in a number of countries built its reputation in Ireland on the fact that it produces “green” cement.