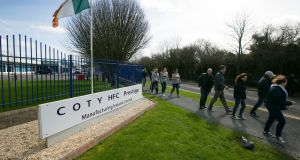 Members of staff leaving the Coty beauty products manufacturing plant in Nenagh after hearing that the factory is going to close with the loss of 200 jobs. Photograph: Brian Gavin / Press 22

Cosmetics giant Coty has confirmed it is closing its Nenagh plant, with the first layoffs among the staff of more than 200 expected in October.

Company executives told workers at the former Procter & Gamble plant that operations will be phased out between now and the end of 2018.

Nenagh was one of two Coty plants axed yesterday, with another 450 workers in the Northumberland village of Seaton Delaval informed that their plant too would be shutting down.

Both plants are among facilities acquired by Coty in the $12.9 billion purhcase of Procter & Gamble’s specialty beauty business last October. It is understood that Coty is cutting 900 jobs altogether across the group.

In a brief public statement, Coty said it was “proposing to consolidate our cosmetics operations into two core centres which will result in the closure of the Nenagh plant”.

The Tipperary plant manufactures a range of mascaras and powders for the Max Factor range of cosmetics. The company is moving production to another plant in the Kent town of Ashford and to its US Covergirl plant in Hunt Valley, Maryland.

An almost identical statement was released in the UK about Seaton Delaval which produces fragrances.

Workers knew that Coty was running a study to determine whether it made sense to continue operations in Nenagh, Ashford or both. They had hoped that Brexit would strengthen the case for the Tipperary plant.

“We feared the worst, but hoped for the best,” said Denis Finnerty, vice-president of the local chamber of commerce. “This is far worse than we thought.”

“Ultimately this is about Coty global restructuring and Nenagh has fallen victim to that in a competition with Ashford in Kent,” said local Labour TD Alan Kelly.

Visiting the Nenagh factory, Independent TD Michael Lowry said the consolidation of jobs to Coty’s plant in Kent was surprising given political rhetoric “that Ireland will gain opportunities [under Brexit].

“What has surprised me is that the [Nenagh] jobs are actually going to the UK; I would have never thought that the UK were that more competitive than we are in Ireland,” Mr Lowry said.

Mr Finnerty described the closure as “a huge loss for the community. The economic impact on a small town like Nenagh is also huge”, he said, noting that Coty’s workforce was earning €14 million a year in wages.

“Whole families, husbands and wives and partners, siblings, are all dependent on this plant for their economic viability,” he said.

Staff will receive redundancy of six weeks pay per year of service based on their highest pay in the previous three years, plus two weeks’ statutory redundancy under the terms of an arrangement put in place by Procter & Gamble.

Coty, which is majority owned by Procter & Gamble shareholders, had agreed to respect the redundancy terms if staff were let go within five years of the company taking control of the plant.

Procter & Gamble employed as many as 650 staff at the plant as recently as 2007 but close to half those jobs were lost when the company moved its skincare business to a plant in Poland.

* Coca Cola separately announced yesterday that around 50 jobs in its Irish business will be lost under a reorganisation that will see it centralise certain functions across Europe. Staff at the company’s Southgate plant in Drogheda are those most likely to be affected.

Coca Cola employs around 1,750 people in Ireland at plants in Ballina, Wexford, Athy and Drogheda.