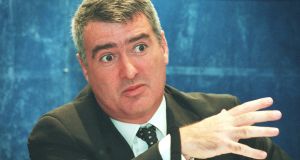 Ardagh chief executive Ian Curley: he has handed in his resignation to “pursue other business opportunities”

The chief executive of glass and metal containers maker Ardagh, Ian Curley, has handed in his resignation to “pursue other business opportunities” after only a year into the job and just months after the company floated on the New York Stock Exchange.

The statement sent Ardagh’s shares down as much as 3.9 per cent in early trading in New York on Friday, with investors caught off guard.

Ardagh’s executive chairman and leading shareholder, financier Paul Coulson, will become chairman and chief executive, the company said in a statement on Friday.

Mr Curley will leave the company by the end of the year.

“It is a surprising and unexpected development that will likely be taken negatively by investors as he was seen as a very strong figure to lead a company with Ardagh’s level of debt given his success at Smurfit Kappa,” said David Holohan, chief investment officer at Merrion Capital in Dublin.

The development comes just six months after Ardagh raised more than $350 million (€292.6m) through an initial public offering and listing on the New York Stock Exchange, using the funds as well as cash on its balance sheet to pay down debt.

The group’s total borrowings stood at €6.96 billion, or 5.1 times earnings before interest, tax, depreciation and amortisation (ebitda) at the end of June, down from 5.3 times in March. The company’s move to refinance billions of euro of debt over the last two years has seen its average interest rate fall to less than 5 per cent from over 7 per cent.

At Smurfit Kappa Mr Curley presided over the company’s efforts to lower its debt ratio following the financial crisis.

The executive didn’t respond to efforts from The Irish Times to secure a comment on Friday on his reasons for leaving Ardagh.

Separately, Ardagh said it has appointed Johan Gorter, head of its European glass business, as head of its global glass division. He will join David Wall, chief executive of the group’s metals business, and David Matthews, chief financial officer, in reporting directly to Mr Coulson.

Ardagh said on Friday that revenues and ebitda have continued to grow this year, and that it was on track to cut its debt burden further as cash-generation in the second half of the year is expected to be “strong”.