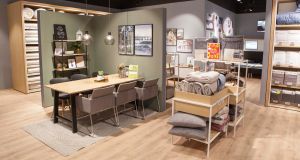 Danish retalier Jysk has criticised the Government’s construction shutdown, saying it will hamper its growth plans in Ireland.

Major international retailers have expressed frustration over the Government’s shutdown of the non-essential retail sector and warn the longest retail lockdown in Europe is costing investment. Decathlon has postponed two openings here this year, while Danish furniture retailer Jysk criticised the construction shutdown, saying it will hamper its growth plans. Mark Paul reports.

Employers’ group Forest Industries Ireland lobbied the Government to appoint the expert whose report forms the basis of a new policy for the sector. The Project Woodland forestry strategy is based partly on a report written for the Government by Scotland’s former chief planner, who was hired without going through a recruitment process, reports Barry O’Halloran.

Pressure is mounting on Davy after the firm broke EU market rules by failing to manage a potential conflict of interest in a bond-selling deal and was fined €4.1 million by the Central Bank earlier this week. The firm’s secret partnership now leaves it fighting its biggest crisis in decades, writes Joe Brennan.

In his Caveat column this week, Mark Paul writes that Ireland needs a mindset shift to build an outdoors fun economy for summer and that bureaucracy must be flung out the window to facilitate hospitality and trading outdoors.

Representation of women on the boards of Ireland’s 20 biggest publicly quoted companies has reached 30 per cent, up from just 18 per cent less than three years ago. However, progress on gender balance remains “fragile” overall and slow on leadership teams, reports Laura Slattery.

BiaVest, a food-focused investment firm, has taken a stake in Nobó, a dairy-free ice-cream and chocolate producer founded by a Dublin-based husband and wife team, reports Mark Paul. The investment will be used to help finance a drive into the European market in the summer.

Former property developer Liam Carroll, one of Ireland’s most prolific builders in the lead up to, and during the Celtic Tiger era, has died aged 70. The media-shy tycoon not only made a massive contribution to the capital’s residential stock, but was also involved during the boom in many of the city’s highest-profile commercial real estate plans, writes Ronald Quinlan.

Minister for Finance Paschal Donohoe has warned the State’s large national debt leaves it exposed to a future upturn in interest rates, and that the budget deficit would have to be brought down once the current crisis abates. However, he declined to indicate if that meant tax increases, reports Eoin-Burke Kennedy.

In Wild Geese, Hugh O’Donnell tells us how he ended up in Bermuda and how 1980s Ireland had lost interest in people like him.

Publican Charlie Chawke has lodged a €186 million fast-track plan to construct 299 apartments on a site beside his bar in Goatstown, south Dublin. However, Chawke’s Charjon Investments group may run into problems over the height of the proposed blocks. Gordon Deegan reports.

Few people would choose to set their careers back by 10 years, but that’s exactly what happened to one woman when she took leave from a professional services firm to have a baby. Olive Keogh reports on a problem that hurts both employer and employee.

In his column this week, John FitzGerald writes that job creation is not the be all and end all and that new jobs figures jobs greatly exaggerates the benefits to society.