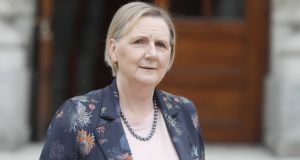 Representation of women on the boards of Ireland’s 20 biggest publicly quoted companies has reached 30 per cent, up from just 18 per cent less than three years ago when the Government launched a group to monitor the gender mix at the top of Irish business.

The 30 per cent level is seen as an important threshold for critical mass, making it more likely that companies will benefit from the experience and perspective of female directors.

Appointment rates for women to listed company boards have improved, the Balance for Better Business group said. Out of a total of 30 appointments since September last year, 10 (or 33 per cent) were female, up from the previous rate of 27 per cent. Among Iseq 20 companies, the appointment rate was 38 per cent.

“It shows that monitoring does matter,” said Brid Horan, the Nephin Energy chairwoman who co-chairs the business-led group with Greencore chairman Gary Kennedy. “When things get measured, they get managed.”

But she warned that progress remained fragile, with the potential for advances to be reversed by small changes in appointments and replacements, while an ongoing “serious lack” of women on executive leadership teams points to the continued waste of female talent.

“We are concerned that leadership teams are not making progress as fast as we would like,” Ms Horan said.

This is happening both in sectors that start out with a 50:50 balance but “lose women along the way” and those that tend to attract more men than women as a result of gender stereotyping in education and culture.

Efforts to bring better gender balance into leadership teams “definitely has to be led by the chief executive, supported by the board”, Ms Horan added.

“We have moved beyond the concept of unfairness. This is about getting the best out of your organisation.”

Tánaiste and Minister for Enterprise, Trade and Employment Leo Varadkar, who launched Balance for Better Business when Taoiseach in 2018, said the data marked “encouraging” progress, but there was “still a lot more work to be done” to narrow the gap between men and women.

“We need to close the gap entirely. Women make up more than half the population and therefore more than half the talent and capacity. It makes no business sense to exclude women from senior roles. On the contrary, it makes sense that companies with gender-balanced and diverse leadership will do better in the 21st century economy.”