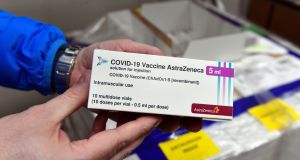 A box of AstraZeneca vaccines. Belgium approved use of the vaccine in all age groups on Wednesday, a day after France

Germany changed its mind on the AstraZeneca Covid-19 jab on Thursday after its vaccine commission said it was suitable for over-65s after all.

Five weeks ago the commission said it did not have enough test data to recommend its use for older Germans. This threw into disarray the country’s vaccination schedule, which prioritises older age cohorts, and left more than 80 per cent of vaccine deliveries untouched in refrigerators.

”This is good news for older people who are waiting for a jab,” said Mr Jens Spahn, federal health minister, promising to expedite a change in Germany’s vaccine regulations.

“The new data also shows that the vaccine is even more effective when the first and second jabs are administered 12 weeks apart.”

It remains to be seen if the new policy can speed up the vaccine programme or reverse the perception among some Germans that the British-Swedish product is less effective than other vaccines available.

Last week Prof Lothar Wieler, Germany’s infectious disease monitoring chief, said that “nothing would make me happier” than to get the AstraZeneca jab soon. ”It is wrong to talk about a second-class vaccination because all the vaccines offer a high level of protection.”

Sweden followed Germany on Thursday afternoon, saying three British studies show the AstraZeneca vaccine to be “as effective as other vaccines that have been approved, and works for people even over the age of 80”.

Belgium approved use of the vaccine in all age groups on Wednesday, a day after France.

A month after President Emmanuel Macron described the AstraZeneca vaccine as “almost ineffective” in older people, French health minister Olivier Vergan said anyone older than the age of 50 with pre-existing conditions can receive the Oxford-AstraZeneca vaccine, “including those between 65 and 74”.

Meanwhile, Italy has reportedly made the first intervention in the EU to block a vaccine export. According to Italian media reports, Rome refused AstraZeneca’s request to export 250,000 doses from an Italian plant to Australia.

Last January the EU imposed temporary controls, lasting until the end of March, on vaccine exports manufactured inside the bloc after a spat with the Swedish-British pharmaceutical company.

On Wednesday evening, after nine hours of talks, German leaders agreed a six-step plan to reverse lockdown measures in the coming weeks. Most restrictions will remain in place until at least March 28th, though from next Monday one free Covid-19 test a week will be available to all.