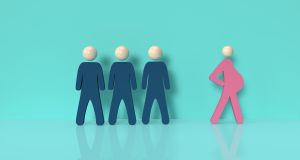 Few people would choose to set their careers back by 10 years, but that’s exactly what happened to one woman when she took leave from a professional services firm to have a baby.

She had been assured she would get her clients back on her return but this didn’t happen. Instead, she found herself having to rebuild her client base from scratch. Her relationship with senior management deteriorated and, as far as she was concerned, a decade of commitment and achievement apparently counted for nothing.

This woman’s experience is not unusual and was one of many similar stories that Yseult Freeney, professor of organisational psychology at DCU Business School, came across as part of her recent study into the impact of maternity leave on women’s careers.

The study reviewed the experience of 300 high-performing women who had taken leave and it clearly showed that many firms failed to offer them any support on their return from this life-changing event.

Women returning to organisations that consider pregnancy an inconvenience find it much more difficult to re-establish their careers and the problem can be even more acute for those in client-facing roles.

“In the worst situations, women’s careers were often seriously derailed,” Freeney says. “Some of their colleagues showed unconscious bias towards them on their return and very often this had a detrimental impact on professional relationships.”

What’s key here, Freeney adds, is that this bias only affects women. Becoming a father is viewed as positive and often boosts status, earnings and career prospects.

In companies with a positive attitude to maternity leave, however, it was a different story.

“In supportive cultures, the returning women reported a renewed energy and focus for their work, a feeling of being valued, and an enhancement of professional relationships,” Freeney says.

Some of the issues women face as returnees are often down to a mismatch between the expectations on both sides. “Assumptions are made that don’t get challenged. For example, a line manager may assume the returning woman wants a lighter load or is suddenly less ambitious and of course very often this is not the case,” Freeney says.

“One thing that could help both sides is for companies to invest in returnees the way they invest in new recruits. Companies spend heavily on onboarding new employees but very few pay the same level of attention to reintegrating employees after maternity leave.

Failure to do so has significant implications for employee retention. Why would a woman stay in an organisation that stacks things against her just because she’s had a child?”

When a woman returns from maternity leave there is no hiding the fact of a new baby. Far more sinister is what American economics professor Emily Oster calls “secret parenting” where women try to hide their pregnancy for as long as possible, never mention their children when they return to work, don’t have photos of their children in their offices and often lie about their reasons for leaving work early if it’s related to their children.

In Oster’s view “we need to normalise the experience of parenting while working” and parents need to speak openly about their children and childcare responsibilities. If they do, their colleagues will adapt. If they don’t, they won’t.

“The general sense is that everyone should adopt the polite fiction that, after the first several months of leave, the child disappears into a void from which he or she emerges for viewing and discussing only during non-working hours,” Oster says. “These pressures aren’t just bad for parents; they’re bad for employers. Inflexibility around child care is, quite simply, going to cost firms valuable workers.”

Recruitment consultant Karen O’Reilly, who set up Employmum/Employflex to help women caring for children find jobs that matched their needs, says secret parenting is very much a live issue with the women she interviews every day.

“At least one in five flag it and just today we spoke to a woman who was in line for a promotion and, once the bump appeared, she was sidelined. The person she was training in (a man) got the promotion instead,” O’Reilly says.

“At the recruitment stage, particularly in the private sector, most women will avoid mentioning they have children and/or are planning on having children. It’s all part and parcel of the ‘motherhood penalty’. The problem is widespread and very often the companies that boast about their diversity and inclusion are the worst when it comes to real flexibility and family-friendly policies.”

Prof Freeney says that, if organisations are genuine about keeping the pitch level for female returnees, they need to show it.

“One example we came across was where a woman was promoted to partner as she was about to go out on maternity leave,” she says. “This clearly signalled that her firm valued her, supported her and had a long-term interest in her career.

“Not surprisingly, if companies don’t appear to value their talent, these very capable women can end up feeling frustrated and let down and some of them will ultimately drop out of the paid workforce.”