Janet Yellen has made at least $7m from speaking fees, records show

Incoming US treasury secretary was paid for events at Goldman Sachs, Barclays and others 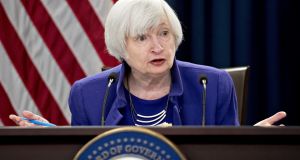 The incoming US treasury secretary, Janet Yellen, has been paid at least $7 million (€5.75m) for speaking engagements at government-regulated banks, consultancies and hedge funds over the past two years, according to newly disclosed documents.

The former Federal Reserve chair disclosed a list of more than 50 paid speaking events for financial firms that included $67,500 from Goldman Sachs, $54,000 from an event at Barclays and $292,500 from a single speech for hedge fund Citadel.

The documents were submitted to the US Office for Government Ethics as part of Yellen’s efforts to secure the top role at the US Treasury. While she has already been chosen for the post by the president-elect, Joe Biden, she still has to secure formal approval from the US Senate.

The filings showed Yellen also earned $112,500 from a single speaking engagement with UBS, $225,000 from a speech for PwC and $270,000 from an event with the London-headquartered bank Standard Chartered.

It is common for high-profile government officials such as Yellen to take paid speaking roles after retirement. Ben Bernanke, who served as chair of the US Federal Reserve before Yellen, reportedly earned about $250,000 for a single speech after leaving the central bank, where he earned $199,700 a year.

However, Yellen – who earned just over $200,000 a year when she headed the US Fed between 2014 and 2018 – said she would get official permission before taking part in decisions involving any companies that had paid fees to her once she was formally appointed to the Treasury.

Yellen also promised to step down from the Australian investment firm Magellan Financial Group, from which she has earned $125,000 as a consultant and about $225,000 in speaking fees. She pledged to give up assets in 13 firms, including the telecoms giant AT&T, pharmaceuticals firm Pfizer and chemicals firm Dupont to avoid any conflict of interest.

Similar filings from the current Treasury secretary, Steven Mnuchin, a former Goldman Sachs executive and Hollywood film financier, before his appointment in 2017 did not reveal any significant speaking fees.

However, Mnuchin promised to divest at least $94 million worth of investments in 43 firms once he was appointed to Donald Trump’s cabinet. He was later criticised for failing to properly disclose he owned nearly $100 million worth of real estate and held a directorship with offshore business vehicle based in the Cayman Islands, a tax haven. – Guardian